With the better weather and sun now shining, albeit a little on the windy side, I had intended to go over to Chara de Suarez for the morning but, sad to say, I overslept and no way could I make it in time for the restricted opening hours.  (The moreso having seen Mick Richardson's photos of the Spotted Crake taken yesterday!)  So it was down to the (very) local patch at the Rio Velez and a site I have not visited for maybe three months or more.

A White Wagtail as I approached the factory to park the car just above the N340 road bridge and a couple of Blackbirds with a number of Collared Doves calling.  Even before walking under the road bridges I could hear numerous Nightingales and Cetti's Warblers and then the first of at least three Hoopoes during my ninety minutes at the river.  Plenty of water in the river but mainly static and even more debris, mainly bamboo off-cuts and general vegetation rather than plastic and household rubbish.


Apart from the continuous calling/singing of the Cetti's Warblers and Nightingales there were many sightings of Serin and Goldfinch with  a handful of Barn Swallows.  At least a dozen male Mallards on the river plus a similar number of Moorhen.  Two Little Egrets and the same number of Grey Herons were observed.  Lovely, I think, to see a late Chiffchaff and then the hoard of noisy Monk Parakeets passed overhead.  having noted the Woodchat Shrike I made my way down to the, now realigned, beach.  A small number of Black-headed and Yellow-legged Gulls plus two Coots to add to the morning's sightings.


Making the return journey I was somewhat surprised to see a Zitting Cisticola land on the vegetation within a couple of metres and then disappear below to, presumably, its nest.  Another Woodchat Shrike on the  fence then a trio of Blue-headed Wagtails flew across the track with one returning to feed in the nearby field. 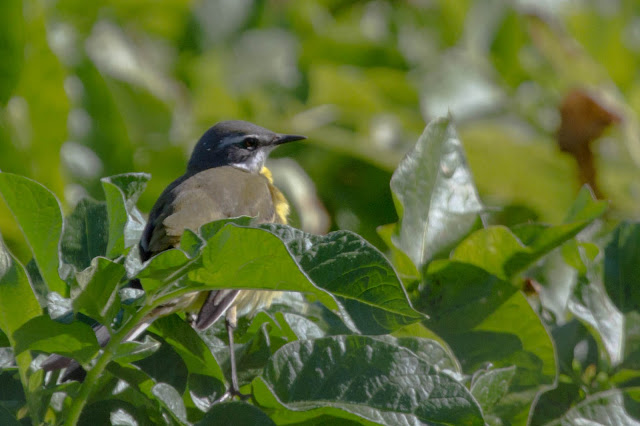 A drive further up river for about two hundred metres or so produced the expected House Sparrow, and Spotless Starling but the very last bird recorded, at last, was the only wader seen, a single Little Ringed Plover to take the species total up to 25.

Check out the accompanying website at http://www.birdingaxarquia.weebly.com for the latest sightings, photographs and additional information
Posted by Bob Wright - The Axarquia Birder at 06:25