What a last day to the month where I managed to take my species total up to 145 following the long morning visit to the El Fondo reserve, near Elche in Alicante province.  Leaving home after morning dance club on Friday, jenny and I spent the evening with Barrie and Jan Avis in Bolnuevo before setting out with Barrie at 6.30 to arrive at the reserve's North Gate for an 8am opening.  Here we met the waiting Dave Elliott-Binns and his companions Mary and Frans whilst a resting Cattle Egret and Magpie in the old tree were seen at the end of the drive near the main gate and our friends heard a "yaffling" Green Woodpecker off to our left and, as we waited, watched the local Spotless Starlings and a few Collared Doves take to the sky.

Driving down the main track to the far elevated hide we had a Moorhen in the canal on our right and a flock of over fifty Flamingos in the early morning light to our left.  A Raven flew off to our right and there was the continuing passage of individual Herons moving between the waters.  From the hide, through the early morning mist, we took in our first Little Grebes, a couple of Shoveler and the brief appearance of a Water Rail on the far bank before settling down to really see what was on view.  Behind us, facing the low sun, we picked out a solitary Osprey resting on a short pole in the water and this bird was to remain in situ for the rest of our stay in this area.

Immediately in front a good-sized flock of Red-crested Pochard and, a little further away, a smaller group of Common Pochard.  Back on the other side, with the sun now behind us, we watched a Green Sandpiper land on a very small muddy area and, on focusing on the bird, also picked out the feeding Snipe.  There was also a small number of Coot and a couple of White-headed Ducks paddled across the water.  Meanwhile, on the reeds to our left, Dave managed to find a feeding Bluethroat which gave all of us good views and off to the right a female Marsh Harrier rested on a short post.  Above the reeds on the far side the nightly roost of Barn Swallows were waking themselves up and taking to the skies.  A Kingfisher flashed across the water and then we had a good view of our first Iberian Grey Shrike of the day.  Then the first sightings on Cormorants moving between the various waters. 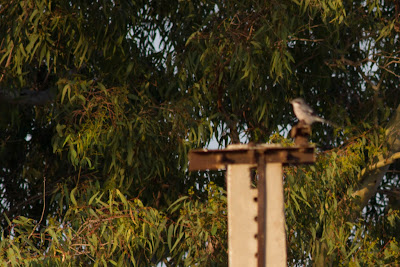 Finally, one of the calling Purple Swamphens put in an appearance and a pair of Great Tits arrived to feed on the reeds immediately in front of the hide.  Dave saw a Little Bittern dart across the tops of the nearby reeds to the left and quickly disappear down below. But, on the other hand, we were all on the ball when a second Little Bittern hurried over the reed tops and dropped onto the track below us before disappearing into the vegetation.

Next it was on the the small hide over looking the water containing the above Osprey.  Closer views of the Common Pochards and also a number of Mallard and Great Crested Grebes.


Moving back to the main track and the "Wasp Hide" overlooking the flooded fields, informed by Dave that the water level had dropped considerably since last Saturday so leaving much exposed mud, we quickly picked up a good number of Ringed Plover along with both a Common and Wood Sandpiper.  A couple of Bluethroats were bust feeding in and out of the cover and in the far distance among the main Flamingo flock we could see a good number of Black-winged Stilts along with a handful of Avocet and a very small flock of Black-headed Gulls.  After checking photographs and a more concentrated study with bins and scopes we eventually also found a couple of Little Ringed Plovers and the first Little Egrets of the morning.   To add to the handful seen on first arrival, there were a number of Shelduck feeding on both the shallow puddles and deeper water further out and then a small flock of Sanderling skimmed over the mud at the water's edge..


The final elevated hide gave a different view over these same fields but we did manage to find another Iberian Grey Shirke along with both a second Booted Eagle, Barrie having found a very distant bird from the first hide, and Kestrel.  Above us the hirundines were busy feeding; mainly Barn Swallows but also a few House Martins and the occasional Sand Martin.

With the gates due to close at 11.30 we returned to our cars and made our way round to the Visitors Centre.  No sooner had we arrived and we were visited by the local House Sparrows and in the small pool in front of the hide we had a close view of a Purple Swaphen along with a quartet of Red-knobbed Coots.  Taking the board walk over the pool, Dave stopped to photograph a Plain Tiger Butterfly Danaus chrysippus and Barrie and I had a close view of a Great Reed Warbler before it crossed the walk, rested awhile in the bush tops then disappeared down behind the adjacent fence.  Then, having already seen a flock of at least forty Glossy Ibis overhead upon arrival at the Centre, we found a number of resting individuals along with very many Cattle and Little Egrets plus a number of Common Coots.


However, what really appealed were the four Marbled Duck at the back of the water.  A Cetti's Warbler arrived and posed openly at the water's edge before working its way deeper into the low grasses.On the other side of the boardwalk more Common and Red-knobbed Coot along with another couple of Purple Swamphens and yet more Herons.

Onwards and upwards to the final pair of hides.  To our left the large water area in front of the left hide produced yet more Coots and Mallards along with at least half a dozen Marbled Duck and a couple of Gadwall.  A few more Shoveler and Moorhens added to the total and so many Little Grebes.  On one particular small area of the water there was a "cluster" of about twenty Little Grebes all busily feeding from the surface; I wonder what they had found.  Very little from the final hide on the opposite side of the main track but we did pick up a single White Wagtail.  On this return journey Dave and Mary heard Sardinian Warbler to add to the previously seen Stonechat.


Finally, we completed the loop back to the Visitors Centre and a last look into the first pool visited revealed a couple of female Red-knobbed Coots each with a single chick in tow.  Amazingly, one looked little more than six weeks old the the second probably far less than a month.  Late hatchings and, possibly, the rest of the brood and/or eggs take by local predators such as gulls but, hopefully, these last two chicks might survive into adulthood and raise broods of their own next year.


So ended a wonderful warm and sunny morning in great company and I had seen my first Marbled Ducks of the year as we recorded 55 species in five hours. All that remained was the very long journey back to Mezquitilla after a stop for lunch before hitting the motorway.  (The A7 toll-free road was less then a kilometre away and we left it back in Andalucia just three minutes away from home.  Now that's what you call service!)

Check out the accompanying website at http://www.birdingaxarquia.weebly.com for the latest sightings, photographs and additional information
Posted by Bob Wright - The Axarquia Birder at 05:00