A lovely three hours at the Charca de Suarez this morning with my Belgian friend, Marieke Berkvens; a sort of rehearsal before we set of for the four-day visit to the Donana National Park and Odiel Marshes plus a trip over the border into Portugal.  Indeed, made even better by meeting some dear friends with David and Ann Jefferson entering the first hide within minutes of our arrival and then bumping into Gerry Collins about an hour later.  As we took our leave at the end of the morning we realised that we were also meeting George Hargreaves once again and I have not seen George since the very first meeting of the Axarquia Bird Group, exactly ten years ago this past week.


As we turned into "Turtle Dove Alley" we had already recorded a field of Cattle Egrets and upon arriving at the Laguna del Taraje the first birds on show were a pair of Purple Swamphen.  Also present a few Mallards and a Little Grebe followed by both Coot and Moorhen.  We watched a juvenile Spoonbill fly in and then proceed to feed on the weeded edges in front of the hide and the a Kingfisher flashed past.  A Cetti's Warbler was calling to our left followed by a pair of Teal paddling slowing across the water.  Not just a Robin dropping in but also a lone Snipe feeding, slightly hidden, almost in front of the hide.


With just a few Mallards to be seen on the now full Laguna del Alamo Blanco we made our way to the main hide overlooking the Laguna de las Aneas having first found a pair of Serin drinking near the previous hide overlooking the Laguna de la Cana de Azucar.  From the main hide we could see a number of resting mallard and Coot and with plenty of the latter on the water itself.  Also present were a pair of Cormorant and a single juvenile Flamingo.  A number of Little Grebe plus another Purple Swamphen before the Grey Heron dropped in in front of us.  We also had a good number of Moorhen and, looking carefully, more than a handful of Shoveler as well as a pair of Pochard.  As usual it seems, the first Red-knobbed Coot of the morning was the collar-ringed individual that is usually found right at the rear of this water, a flashing then feeding Kingfisher and, finally, a visit from a White Wagtail.

The Laguna del Trebol produced the expected unringed Red-knobbed Coots along with their more common cousins the Common Coot plus a further Purple Swamphen, Moorhen and a few Mallards. Leaving to visit the hide on the opposite side, where we confirmed that at least a pair of collar-ringed Red-knobbed Coots were still present, we saw both single Spotless Starling and a male Blackbird.  A very brief appearance of a single Common Waxbill before the female Pied Flycatcher put in a long appearance as she commenced feeding in iconic fashion.  Leaving the hide we managed to find two Chameleon, one green and one brown reflecting the branches on which they were respectively climbing. 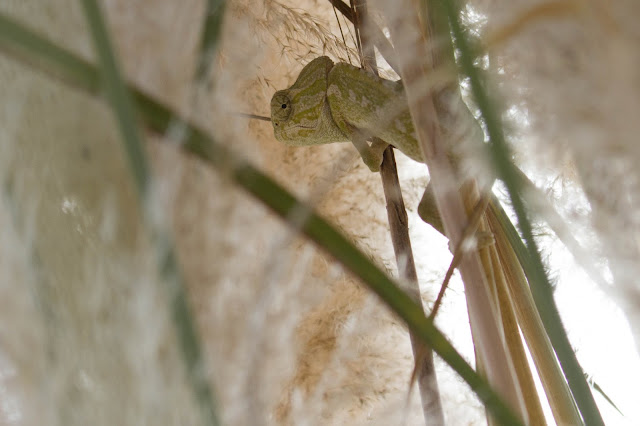 A female Kestrel passed overhead before we made our last stop at the Laguna del Lirio where, yet
again, it was Moorhen and Red-knobbed Coot that were to be seen till a Grey Wagtail dropped in.  Finally, returning to Turtle Dove Alley we found a female Stonechat and having joined the main road immediately had a light morph Booted Eagle overhead.


Check out the accompanying website at http://www.birdingaxarquia.weebly.com for the latest sightings, photographs and additional information
Posted by Bob Wright - The Axarquia Birder at 15:05