Having been confined to quarters whilst painters redecorated the exterior of the house since first thing Monday morning, I almost followed off the premises when work was completed just after 10.30 in order to get out once more into the glorious sunshine.  With so little time left before I depart back to the UK for a lengthy stay i was determined to see if I could find the pair of Rufous Bushchats that had moved to the other side of the village near Fuente de Piedra.  Food and drink with me (just as well given the fifteen minute delay due to roadworks on the motorway) I was expecting to settle down, be patient and wait for one of the birds to expose itself having been informed that the wires wee a favourite perch.

Working my way through the village I had Collared Doves and Barn Swallows plus many House Sparrows and then found a shady spot opposite, what I hoped, was the designated vineyard. Window down, bins and camera to the ready and I took a first look across the road.  House Sparrow on the parallel wire to the road and then , I don't believe it, there on the wire stretching sat a very lovely Rufous Bushchat.  I'm not sure who was the more surprised!  I tried a shot at a very awkward angle through the window and knew i would have to either move the car or try and slip out of the door. This bird was not stupid and knew exactly what I was trying to do so made a hasty exit left and down to disappear out of sight into the well-grown grapes.

Ant that, as they say, was my only sighting.  I tried moving up and down the road in the car, waited, searched and all to no avail.  On the other hand, it was not so much the odd Spotless Starlings and House Sparrows that put in an appearance but, first the Hoopoe that flew in front of me with food for the nest to be quickly followed by a ghostly white shape over the trees near the farm to my right; a most handsome male Montagu's Harrier.  Next up a Linnet on the wires and the final bird before departure the first Corn Bunting of the day. 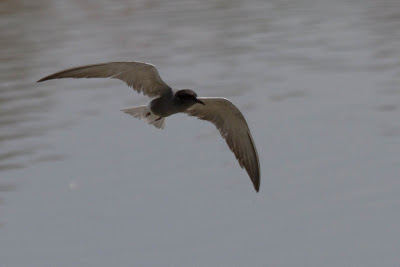 Moving on to Fuente de Piedra itself I parked next to the flooded field on the approach road and was immediately rewarded by a small number of feeding Whiskered Terns.  Then many more Gull-billed Terns put in an appearance and all the while the Barn Swallows were feeding overhead.  On the water itself a number of Coots and Black-headed Gulls along with the Black-winged Stilts and delicate Avocets.  At the far end a mallard and a couple of Shelduck and I noticed many foraging Jackdaws. 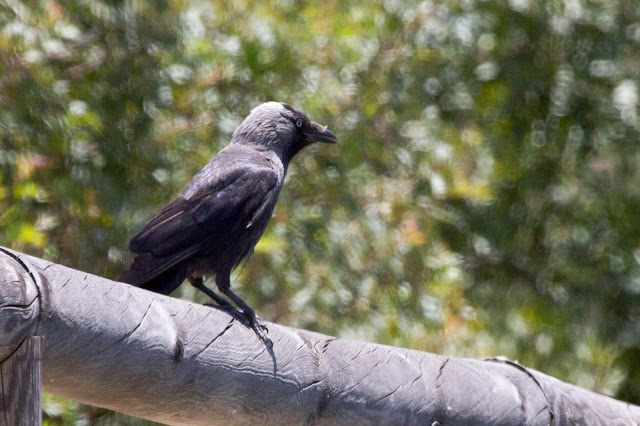 Water below the boardwalk but rapidly disappearing and, again, just a few Avocets and Black-winged Stilts, so it was on up and round the Visitors Centre to the laguneta at the rear.  It was very obvious by the blinding white that the main laguna was just about dry with the salt reflecting the strong sun but, away to the far left, there was a little water which held as many as a couple of hundred or more Flamingos.  On the other hand, immediately below me, a damp area was being used as a roost by scores of Gull-billed Terns who seemed to take it in turn to go screaming away on an exploratory mission. 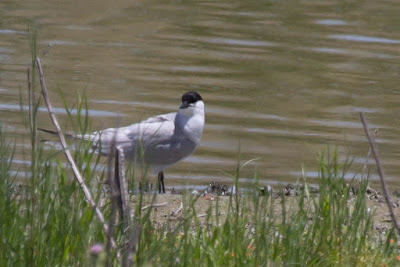 Amazing, given the lack of water on the main laguna, how much water was in the laguneta with the islands almost submerged.  Lots of Avocets to be seen along with Black-winged Stilts (presumably these birds have had a successful breeding season) and on the water a number of Little Grebes and even more Black-necked Grebes.  Relaxing on the shore immediately below the hide a single Lapwing surrounded by both Common and Red-crested Pochards and a quartet of Shelduck.  I finally found a wandering Moorhen and all around me the Nightingales were in full voice; beautiful. Working my way back to the car park below the  mirador I listened to numerous Reed Warblers singing away, took in the Little Ringed Plover from the boardwalk and then looked up in time to see a passing Black Kite. 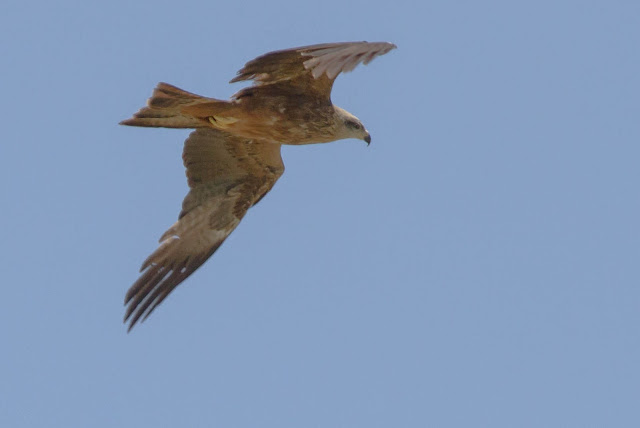 Rather than return straight home I took a very roundabout journey via the Cacin Valley area where I hope, just hoped, that I might find both the local Black-bellied Sandgrouse and the breeding Rollers. After my previous success I was to be doubly disappointed.  On the other hand, I had good views of a Woodchat Shrike and both Wood Pigeon and Crested Larks were to be seen.  A couple of Magpies flew over and as I set off for home I came across what looked very much like a not too recently-fledged Short-toed Lark.

A long old journey back to Mezquitilla but it started with a Blackbird and was followed by Cirl Bunting, Thekla Lark and House Martins as I drove through Ventas de Zafarraya.  Finally, as I drove under the old railway bridge and entered Malaga Province and the Axarquia, a Chough rose up from the road immediately in front of me just to remind me that I was now in "Chough Territory."


Check out the accompanying website at http://www.birdingaxarquia.weebly.com for the latest sightings, photographs and additional information.
Posted by Bob Wright - The Axarquia Birder at 13:04