A morning a the Charca de Suarez reserve on the western outskirts of Motril with my fellow ABS friend Linda Roberts but arriving in time for a quick stop in "Turtle Dove Alley" where, near the old ruin, we once again heard Quails calling having already recorded both Collared Dove and Barn Swallow as we entered the concrete road.  Driving down we had very brief glimpses of Red Avadavats flying over plus a good number of Zitting Cisticola and a pair of Crested Larks.


Parking opposite the reserve I opted to take scope rather than camera which turned out to be the wrong decision.  On the other hand, I was able to rectify the matter at the half-way point of the morning though missed out on the better opportunity to photograph the pair of Purple Herons that were showing very well on the main lake.  As soon as we entered and walked towards the Laguna del Taraje to check out the Little Bittern status we had many calling Turtle Doves.  No Little Bittern this morning but both Common Coot and Mallard.  In addition, many House Martins and a small number of Barn Swallows feeding overhead and no shortage of singing Nightingales, Cetti's and Reed Warblers.

A couple of Blackbirds chased here and there as we made our way towards the Laguna del Alamo Blanco where more Mallards were sighted along with a single Grey Heron flying over and a visiting Spoonbill. Just a couple of Common Coots and as many Moorhens and closer inspection recorded both a pair of Black-winged Stilts and a single Snipe.  needless to say there was always the odd Spotless Starling or two moving about.

Having found a lone Common Sandpiper a the new hide on the far end of the Laguna del Taraje we then found two more on the main Laguna de las Aneas, presumably the same bird.  many more Common Coots here along with a neck-ring Red-knobbed Coot at the far end plus another resting Grey Heron along with a Little Egret.  Pride of place though must go to the two Purple Herons which looked rather magnificent and much larger than normal.  Moorhens and a Cormorant  along with a good number of Mallards and a single Common Pochard before we eventually found our first Purple Swamphen of the morning.  Little Grebes were active and a number of House Sparrows found something to feed on in the reeds.


So on to the Laguna del Trebol, picking up a Spotted Flycatcher and singing Blackcaps and Goldfinches on the way, where the majority of the Red-knobbed Coots were to be found with their cousins and a number without collar rings was a pleasant relief.  No sooner had we sat down in the hide than a Little Bittern dashed out of the reeds immediately opposite and disappeared up the creek to our left.  Quickly followed by good sightings of a pair of Squacco Herons and, all of a sudden, everything was happening.  A lone White Wagtail proved that it could walk on water and a small flock of Common Swifts flew over towards the west.

From here it was a walk round the back collecting more Goldfinches, Blackbirds and a Great Tit before exiting the reserve to exchange scope for camera.  Returning and taking the anti-clockwise circuit we headed back to the Laguna del Trebol where we duly photographed the Squacco Heron and a  Turtle Dove resting on a dead tree opposite the entrance to the hide before continuing on back to the Laguna de las Aneas.  Only the one Purple Heron to be found and that mainly concealed but, eventually, it did move just those few centimetres and lift up its head to give a better shot of the bird. A Yellow-legged Gull was also recorded before we finally arrived back at the Laguna del Alamo Blanco.  Both the Snipe and Spoonbill had disappeared but the Common Sandpipers and a Little Egret had arrived along with the remaining Mallards and the air of Black-winged Stilts.  Finally, a quartet of Greenfinches as we walked back to the main gate.

On departing the reserve we travelled back by way of Turtle Dove Alley and stopped, once again, at the old ruin to listen to yet more Quails.  Indeed, these diminutive fowl seemed to be following our slow-moving car as we travelled down the road.  A short walk along the track into the growing fields did not produce a sighting but we did then record a single Spanish Sparrow and number of Red-rumped Swallows including the pair nesting inside the above ruin.  A Hoopoe flew across and continued to sing along with a number of Zitting Cisticolas and above us we found a hovering Common Kestrel.  Finally, on looking closer, we discovered that the resident Little Owl was in residence but keeping a very low profile on top of the tall chimney.  Lovely to watch it pop its head just sufficiently so as to see over the top; a most inquisitive little bird.  A lovely morning with Linda and a final count 44 species including some very special individuals. 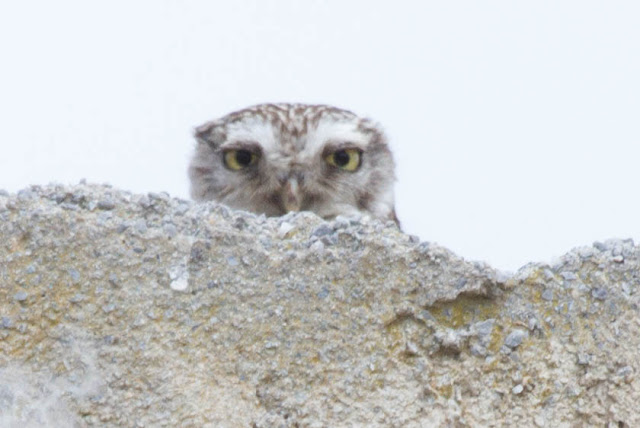 
Check out the accompanying website at http://www.birdingaxarquia.weebly.com for the latest sightings, photographs and additional information.
Posted by Bob Wright - The Axarquia Birder at 01:37