Collared Pratincoles and a Roller at the Guadalhorce

With a dozen of us up in Extremadura for the first week and myself and others away for much of the rest of the month, the June meeting of the Axarquia Bird Group was held at the Guadalhorce, Malaga on the last day of May, what you might call "June's Eve" or even, being the day before June 1st, June 0th!  A beautiful sunny morning with not a cloud in the sky as we set off for the reserve with a final group of thirteen members present for most or part of the morning including Pat and Eric Lyon, Marcus and Liz Rootes, Lesley Laver, Ian Kirk, Ellie Wallbank from Marbella, visiting and welcome back Ian Templeton from Fuengirola, Patrick Raines from Canillas de Albaida with his two small grandchildren, met up at the Laguna Escondida, James Moore, Dan Wilkinson and Brian Green from Triana, my friend Andy Paterson from Torremolinos and myself.  Indeed, along the way we also came across Micky Smith and the ever-present Ted Lord so loads of birders about this morning, which was more than could be said for the birds!  We may only have recorded 50 species but what a selection; it really was a case of quality rather than quantity.

Latest news from Pat to inform me that not only did I miss the Zitting Cisticola seen by James and others but I also managed not to record both the Blackbird and House Sparrow seen by she, Eric and neighbours in the hide.  So unless any further responses come in, it looks like we eventually reached the magic 50 mark.

Setting off from the church in Guadalmar we had a single Jackdaw pass over plus a few Collared Doves then on and up to the river.  Here we had many feeding Barn Swallows and House Martins accompanied by even more Swifts, mainly Pallid at the beginning but soon we were seeing both Pallid and Common Swifts.  The message came from Micky about a rather special duck on the Laguna Cassilas so we were up and running and upon arrival were delighted to find a single male Garganey along with a number of White-headed Ducks, very many Common Pochards plus the odd Mallard.  Not to be outdone, there were also Coots and Moorhens to be seen, the latter with a couple of very young chicks.  A Red-rumped Swallow flew over the water and, in the reeds on the far bank, one of the resident Black-headed Weavers was seen gathering nesting material.  Finally, before moving on tot he Wader Pool, a pair of Gadwall put in an appearance along with a Little Bittern that did its best to entertain those present and watching from the hide. 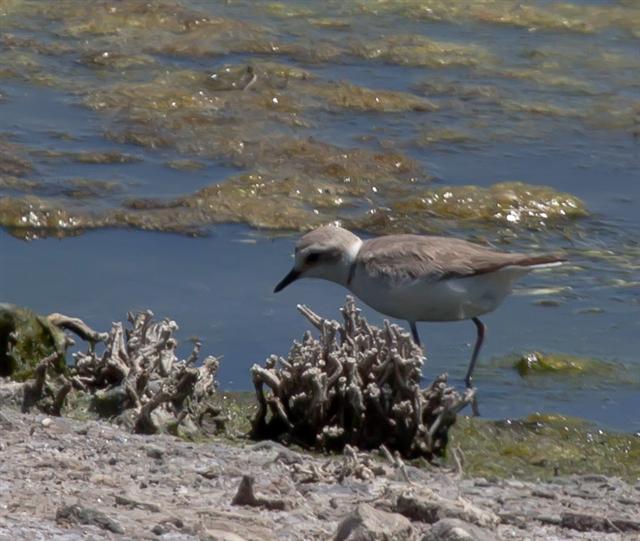 At the Wader Pool a small number of Black-winged Stilts, most seemed to be sitting on nests on or near the Laguna Grande, along with a couple of Redshank, a Little Ringed Plover and three Ringed Plovers.  At one time or another, a total of three Little Egrets wee present and in the distant trees that separated the pool from the Laguna Grande, a small number of Bee-eaters.  Below the hide the occasional Goldfinch and Greenfinch were seen along with a Sardinian Warbler and a very obscured sight of a single Greenshank through Eric's scope.

Moving to the Rio Viejo (the Old River) produced far more activity with many Black-winged Stilts and, probably, at least twenty-five Avocets.  A handful of Redshank along with a small number of Little Ringed, Ringed and Kentish Plover plus at least five Grey Plovers lifted the wader tally and then another couple of "rafts" with over a dozen Sanderling, most in summer plumage, a few Dunlin, a single Curlew Sandpiper and two Little Stints to add to our delight.  On the other hand, the sad sight of the injured Spoonbill which appeared to have a broken leg, or even a foot missing, was not the best way to record this delightful bird.  However, there was more excitement to be had as first we found a nearby resting Whiskered Tern and then to our left on a sandy island a single Collared Praticole.  As we left a quartet of raucous Monk Parakeets passed overhead and, on looking up, we also recorded a few Yellow-legged Gulls.


Reaching the Sea Watch the water looked quite inviting and even the fishermen on the beach were dressed in minimal attire. Just when we had concluded that there was nothing at all to be seen, up cam the sight of twenty-five Common Scoters, including at least two adult males.  It is amazing to see these dark "blobs" gently drifting on the water and then, suddenly, a mass dive before all returns to normal once more.  As we left the viewpoint, the party split into half with the choice being beach or returning the way we had come.  A rather large and lovely female Common Kestrel rose in front of us to bis us farewell and I joined the "return route" group.  Good job, too, for on reaching the Wader Pool we had a good, albeit distant, view of a single Roller in the top of a bare tree at the back of Laguna Grande.  What a sight and what was that doing here?  First a Collared Pratincole and now another bird that ought to have been long gone.  At this rate, there are going to be no new birds to see in Extremadura next week!

Meeting up with the "Beach Party" at the Laguna Escondida we discovered that they had seen a Sand Martin whilst walking the beach.  Very little on the water itself but we did add a Little Grebe and picked up more White-headed Ducks.  So, finally, to the main hide overlooking the Laguna Grande.  What a quiet water this turned out to be with just the occasional White-headed Duck and Black-winged Stilt.  But, after a short while, we did find a resting Whiskered Tern plus a single Black-headed Gull and a lone Slender-billed Gull.  Amongst the feeding swifts we suddenly saw two feeding Collared Pratincoles in the sky.  Matters were not helped when the two wardens present upon our arrival informed us that had we been ten minutes earlier we could have had a clear view of a Golden Oriole in the trees to the left below the tall feeding pole.  Always the ten-minute rule!

So, time to call it a day and make our way back to the cars but, as we walked down the track towards the footbridge a rather splendid Booted Eagle drifted over to say goodbye.  I wonder what the July meeting will bring when next we meet at the Rio Velez on Thursday the 18th?

Check out the accompanying website at http://www.birdingaxarquia.weebly.com for the latest sightings, photographs and additional information.
Posted by Bob Wright - The Axarquia Birder at 09:28