Red-knobbed Coot, Ferruginous Duck AND then a Long-tailed Duck for good measure 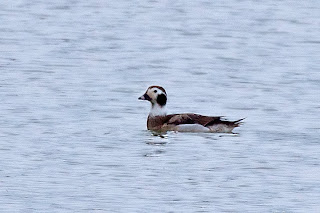 At last time to let readers know about our return journey from the Odial area in Huelva and what a journey it was.  Not so much the dull, overcast sky and the occasional few drops of drizzle , sufficient to require wiper blades at times, but the fact that not one but four "special" birds were seen at our four stops on the way through and out of the Donana National Park.  One would have bee  great but four, almost unheard of!  Indeed, by the time we got back to Casa Collado we had recorded all the expected birds and more with the only "missed" species being the Night Heron.


So here we go.   Having already seen a Song Thrush and small number of Blackbirds on the lawn behind the bedrooms, we were away by 9.30 and heading for the motorway to Huleva from where we crossed the river Odiel by the old bridge and then took the coastal road to Matalascanas and so to El Rocio.  The first Azure-winged Magpies were seen during this early part of the day and then we stopped at the small pool just east of the "gas works" to pick up a Purple Swamphen, Grey Heron and a couple of Common Coots.


Next it was to the Donana's Acebuche Centre (recording Spotless Starlings, a Raven and Collared Doves) where loads of both (common) Magpies and their Azure-winged Magpie cousins were encountered.   A pair of White Storks had set up home immediately above the Visitors' Centre and, with both Crested Lark and Robins about we made our way to the first two hides.  Another Purple Swamphen was seen along with Little Grebe, Moorhen, Pochard and Mallard and, just to keep us on our mettle, a pair of Glossy Ibis flew over and landed in the watery grasses to the left. 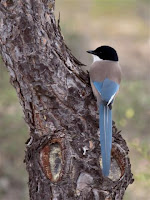 Then the first of our quartet of special birds.  Arriving at the second hide a rather stunning Yellow-crowned Bishop was posing on a tall reed immediately in front f the hide.  I should have been happy with that sighting but there was to be more to follow.

Deciding to make straight for the main lake at El Rocio, we passed a couple of very wet-looking Buzzards along with Stonechats and Hoopoes, not to mention numerous Magpies and Spotless Starlings, and stopped for a shirt while at the hide overlooking the southern end of the laguna.  Half-a-dozen Snipe were feeding in front whilst on the water itself were numerous Black-tailed Godwits, Black-winged Stilts, Little Grebe, many Spoonbills, Mallard, Shoveler, Teal, Flamingos and Black-headed Gulls.  Barn Swallows were feeding over the water and then we spied a few Pintails along withe a number of White Wagtails.


On to the main Information Centre manned by the SEO lady where she duly pointed out the resting Spanish Imperial Eagle.  This end of the water also held both Grey Heron and Little Egret whilst Cattle Egrets were feeding on the  grass behind us.  A single Avocet was also recorded along with a good number of Lapwing and a small party of Jackdaws.  Enquiring about the possibility of Marbled Teal and Red-knobbed Coots, I was told that the lake below the Dehesa de Abajo would be our most likely opportunity and that there was/had been a rather special bird seen here.

Nothing for it but to make our way out of the National Park via the side roads and through that strange village of Isla Menor (why does this small village have a single petrol station that always seems to sell the cheapest fuel in the Region?) recording numerous White Storks and then loads of Glossy Ibis, Little Egrets, Herons, the occasional Great White Egret and then a single Squacco Heron.  In addition this journey from El Rocio to the Venta del Cruce also produced Serin, Goldfinch, Corn Bunting and Southern Grey Shrike.  Perhaps best of all, we even had a handful of Black Storks and both Hen and Marsh Harriers.  But being already after 2.30 we decided to stop for a meal before turning left and heading for the lake at Dehesa de Abajo.


By 3.45 we had passed scores of occupied White Stork nest and arrived at the lake where, immediately, we encountered three Red-knobbed Coots, two wearing numbered neck bands for easy distant identification.  Not too many ducks appeared on the water but Little, Great Crested and Black-knecked Grebes. and Chiffchaffs feeding in the lakeside vegetation.  A Danish couple who we had encountered the previous day in the Odiel Mashes stopped to enquire about sightings of Marbled Teal and we had to rplay in the negative but did inform them that the SEO rep had mentioned a very rare duck had been seen.  Half an hour later we received a signal from the far end of the lake that something had been seen so moved our car along the road to join them.  Imagine our surprise when we, too, sighted what was taken for a female Long-tailed Duck.  Lots of distant photographs and then the bird took off but, surprise number two, instead of tourning towards the back of the lake it swung around and landed in front of us, not thirty metres away.  However, the light was by now rapidly worsening and the bird was in the shadow of the small island opposite.  nevertheless, we had cracking views and this became out third success of the day.


But there was more to come.  Within a very short time we even managed to locate a female Ferruginous Duck with a small mixed party of Pochards, Red-headed Pochards and Shovelers.  And we even had a pair of Tufted Ducks, yet another very rare species for this part of Andalucia.  Absolutely marvellous to have recorded four great birds in one day and what does that say about species such as  Glossy Ibis,  Great White Egret, Squacco Hern and Black Stork? 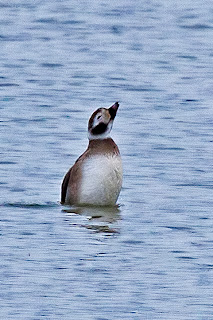 Time to set off for home and a promised stop for a coffee at the first motorway service station after leaving Sevilla.  Seeing the half dozen Red Kites over the motorway near the rubbish dump just east of Sevilla was expected but what did come as a little bit of a surprise was to see that they had been joined by as many as a dozen Black Kites and at least one Booted Eagle.  What a way to end the day and a final tally of 61 species.


Check out the accompanying website at http://www.birdingaxarquia.weebly.com for the latest sightings, photographs and additional information.
Posted by Bob Wright - The Axarquia Birder at 13:43