First day back home after our 32 day clockwise cruise around the Mediterranean Sea with the last stop at Gibraltar last Sunday morning followed by three days of storm and tempest as we made our way north along the Iberian coast then across the Bay of Biscay and finally up the English Channel and round the corner to take the Thames up to our docking at Tilbury in London.  Today had the promise of sun and clear blue skies but the wrong time for low tide so the morning was pent walking Workmans Lane down to the shore, then a couple of hundred metres along the clifftop path before turning inland and back to Workmans Lane.  A quick stop to check nothing was missed on the horse fields before finally returning to my parked car at the top of the lane.  But, being a glutton for punishment, I then ventured out to walk up the Hamble River mid-afternoon on a fast emptying tide - and what a potential mistake that was, but more of that later.

Starting the walk with a Blackbird foraging at the side of the road and a Kestrel arriving to perch immediately in front of me in an almost bare tree, I slowly commenced my journey and could already hear, then see, the many feeding Carrion Crows. Wood Pigeons passing overhead and then amongst the Crows a 15 strong flock of feeding Oystercatchers along with a single Pied Wagtail.  Magpies were seen on both sides of the road and in the field to my right, resting near a flooded dip in the land, seventeen Black-tailed Godwits.  These waders were then joined by a lone Stock Dove which only remained a few minutes or less.  Meantime, overhead, a small flock of departing Starlings.

At the end of the lane the ornamental pool held a quartet of Mallard and looking out to Southampton Water as I walked along the cliff top a couple of Great Black-backed and a single Herring Gull.  Six Brent Geese were flying down water towards the isle of Wight. To my right a female Stonechat alighted on a small bush.  Working my way back up to Workmans Lane  I came across a very obliging Song Thrush then a pair of Meadow Pipits plus another Pied Wagtail. Also present in the area a handful of Chaffinches.

A short walk along the muddy track into the horse fields produced many more Carrion Crow and at least a dozen Pied Wagtails. Lovely to also find a small number of feeding Rooks.  Smaller birds included a Dunnock and Wren plus a pair of Linnet.  Finally, walking back up the lane I next recorded a Great Tit and above me a number of Jackdaws moving from the distant trees to the field on my left.  A total of 26 species for my morning walk.

The double tide we have in Southampton ate is most strange.  Get your timing right and you can swim for hours but the reverse is the case when you want a low tide.  High tide just after lunch and low tide les then three, rather than about six, hours later.  I left the house at 3.30 and should have been gone at least thirty minutes earlier.  Just before 4 o'clock the sun was setting and the light disappearing - which also meant a rapid drop in temperature.  Easy to say very little about but, in the end, I was pleased to record seventeen species starting, unusually, with a handful of Starling and a single Black-tailed Godwit as I approached the river at the start of the walk up the conservation area and back. 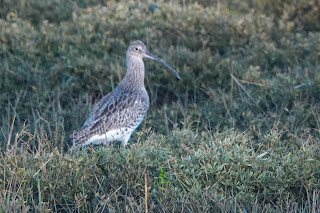 With water absolutely gushing out of the meadow pools It made sense that no birds were to be found sheltering in these bays.  But along the shore a few Redshank, a handful of Curlew and upwards of 50 or more Dunlin.  A special treat to also find a couple of Grey Plover, all now appearing almost golden in colour as sun dipped below the horizon.

No shortage of Brent Geese as I made my way upstream and then the flocks of (many) Wigeon and a smaller number of Teal.  A couple of dozen of Black-headed Gulls spread out along the walk.  A single Cormorant flew downstream over the meadows and then, on the no longer flooded path over the meadow, a lovely Greenshank. 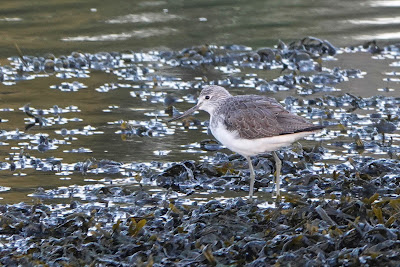 Once at the conservation area time to check out the many Wigeon and a few Redshank including the sudden arrival and departure of a Kingfisher.  No Little Egrets today but I did finally find the lone Heron resting in the grasses at the back.  In a dead tree at the back a "lump" in the tree looked very suspicious but required me enlarging the record shot to confirm a Buzzard.  The return walk home produced another Carrion Crow and a Blackbird. 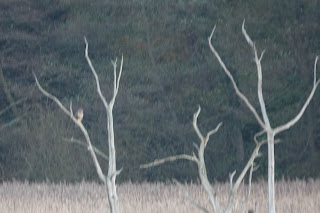 Birds seen during the day: 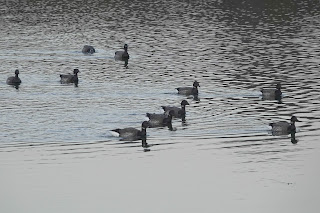 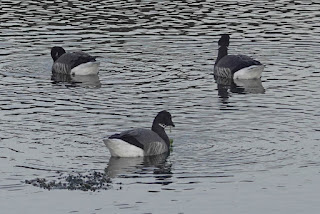 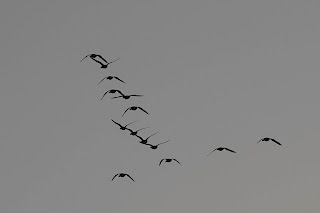 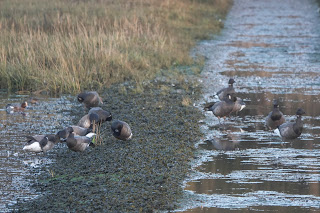 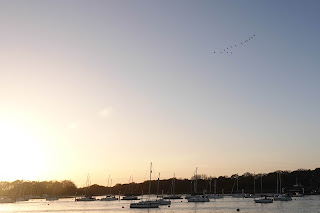 Posted by Bob Wright - The Axarquia Birder at 00:11