Collected friend Steve Powel at 10.20 and then on down to the Rio Velez in Torre del Mar where we met up with friends Derek and Barbara Etherton for a couple of hours exploring the lower river and its new lagoon.  Yet again, another very hot and sunny morning and having parked our respective cars on the slip road towards the old bridge immediately had Spotless Starlings above us followed by the first overpass by a handful of Monk Parakeets. Then, before descending to take the tack alongside the old river towards the public hide at least eight Linnets feeding at the side of the road.

Once on the track a couple of Blackbirds toing and froing and then a one, resting Cattle Egret in the fields to our left.  Derek found a Pied Flycatcher perched on a can to the right pf the egret and then I picked out a second.   Concentrated looked discovered no less than ten Pied Flycatchers in a three metre stretch. Overhead a single Yellow-legged Gull and then one of the resident Kestrels perched atop a pylon. A Blackcap was heard and then, almost at the hide, a handful of Serin.

Once inside the hide we soon had a view of the dozen Black-headed Gulls on the water below us and time to check the shoreline around us.  Sanderling and Ringed Plover were quickly found followed by a few feeding Barn Swallows over the water.  Two Flamingos away to our left but one quickly came to join us in front of the hide and we were to eventually record five juveniles.  Both Redshank and Common Sandpiper walked the shore in front of us before a trio of Black-winged Stilts flew in.  In the neighbouring bushes we recorded Cetti's Warbler, Sardinian Warbler, House Sparrow and more Serin.  A small flock of Bee-eaters was heard as they passed over the hide and a low-flying Black-tailed Godwit headed to the other end of the lagoon.

As we left the hide to walk to the beach a pair of Mallard were seen flying over and in the field beyond the pumping station to tour left a large mixed flock of resting gulls including Black-headed, Yellow-legged, Lesser Black-backed and at least a dozen Mediterranean Gulls.  Passing the end of the lagoon we also noted both a Moorhen and more Ringed Plover.

Nothing to be seen on the sea but looking up the old river a distant Little Egret and a Purple Swamphen with a second also seen paddling across the water.  Nearer, making use of the exposed mud, many more Ringed Plover, mainly juveniles, along with a couple of Sanderling, a single Redshank and Dunlin plus a pair of Ruff. 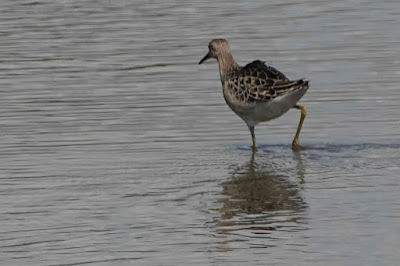 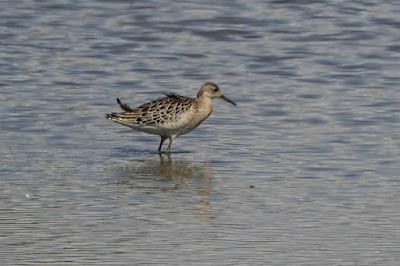 Setting off to walk back up alongside the western side of the dry river a Booted Eagle was noted circling high over the hills in front of us. Derek and Barbara had heard a Reed Warbler and in front of me in the scrubby field to the left I found a foraging Garden Warbler.  Almost at the end of this narrow path we stopped as Derek had heard Waxbills and then thought he had a Bonelli's Warbler in the tall tree in front of us.  Out came the "Merlin" app and on to its sound identification.  Not so much conforming a Willow Warbler our left but it also picked up a Penduline Tit.  Much listening and searching and its high-pitched call was located.  What a way to end the walk and, naturally, as we drew near to the road bridge and our cars the resident Rock Doves put in their expected appearance. 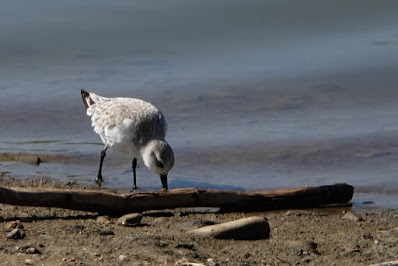 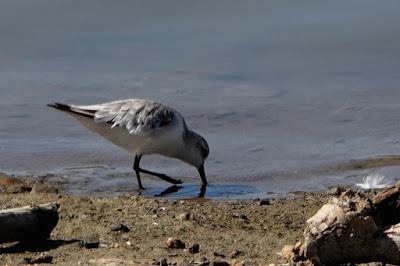 Posted by Bob Wright - The Axarquia Birder at 10:54