Well on my way back home in Velez de Benaudalla so an overnight stop slightly south of Elche in Valencia province meant that I could make an early evening visit to the local reserve at El Fondo.  Still very hot at 31C but at least cooler than most if the day; clear blue skies, an eventual setting sun and the (very) occasional light breeze.

No sooner had I arrived than never mind the Collared Doves on the wires but a couple of Common Swifts above me.  The local House Sparrows were foraging around the closed Visitors Centre and overhead a small flock of passing Glossy Ibis.  A look at the dried up pond behind the Visitors Centre produced a couple of Moorhen along with a trio of Red-knobbed Coots before taking the boardwalk across the first water.

A very busty little lake with a score or more Flamingos along with a quartet of Little Egret and maybe a dozen Mallard.  Just the one female Shoveler but also a Marbled Duck making its way slowly across the open water.  No shortage of Common plus a few more Red-knobbed Coot.  Needless to say more Moorhens and even a handful of Purple Swamphen including one female with two well-grown chicks.

As for Glossy Ibis there was a resting flock of at least two score plus regular passing flights which probably averaged a score each.  Just three Little Grebe noted but there were also a number of feeding Barn Swallows above the water.

So onto the two hides.  With a couple walking ahead of me and turning the smaller hide on the left I decided to carry on to the hide overlooking the main water and then pay a visit to the former hide on my return journey.  Just as well I did.  Obviously there had been no visitors for some considerable time for as I approached the path up to the hide through some low heather a female Little Bittern that had been foraging in the area near a small puddle suddenly upped and away - but not before seen by me. 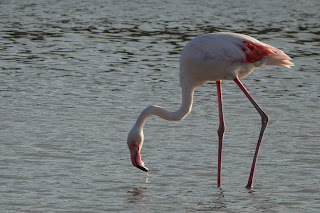 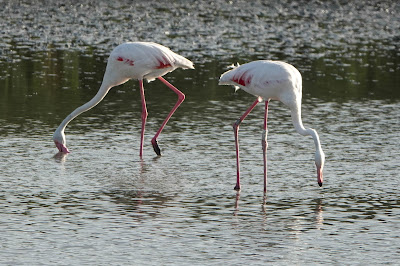 On the water itself very many Flamingos plus at least a score of Little Egrets and an hundred or more Black-winged Stilts.  Just the one Redshank noted but as I was departing I noted the single departing Black-tailed Godwit overhead and came across the large flock of Black-headed Gulls. Once back at the smaller hid I noted another couple of Little Grebe plus a fishing Whiskered Tern.  The return walk over the boardwalk confirmed the large number of resting Glossy Ibis and many Purple Swamphens and both Common and Red-knobbed Coots but both Shoveler and Marbled Duck seemed to have disappeared into the tall reeds.  Indeed, a very enjoyable ninety minutes and well worth the visit.

For the latest news follow the Axarquia Birds and Wildlife Facebook page for more photos and comments and the opportunity to share with the wider birding world.
Posted by Bob Wright - The Axarquia Birder at 02:46