With the forecast suggesting rain by mid-morning I was out of the house just after 8.30 to walk along the foreshore at Warsash and then on down to Southampton Water in very cloudy weather and with a stiff breeze.  Low tide just over an hour previously so water very much on the turn to start pushing the waders up and also, hopefully, some fly over to Hook Pond for a rest.

As I left the house I quickly picked up the first Blackbird and Wood Pigeons and once overlooking the shore added both Black-headed Gulls and Carrion Crows. A Collared Dove and then a huge flock of Starling, certainly at least an hundred, flew over then swirled back inland and a couple of Magpies were on the path in front of me.  Looking down on the water from near Strawberry Fields I found almost a hundred Black-tailed Godwits and the first couple of a half-dozen Little Egrets.  By the time I had reached the Spit I had also added a number of Herring Gulls, Curlew and the first of a dozen Oystercatchers.

Just after the Spit I had a pair of Reed Buntings fly up from the shore with one making a brief landing on a nearby shrub to me left to confirm the identification. Then on to Hook Pond and as entered the viewing area a Linnet bade a hasty retreat (with a group of five making an appearance at the same site on my return walk).  On the water a pair of Mute Swans but only one of the three cygnets on show.  Three Little Grebes along with a few Black-tailed Godwits, a pair of Coot and over thirty resting Mallard.

Moving on to the Meandering Pool, as I entered the scorched area form the devastating fore a fortnight ago a pair of Pied Wagtails were noted.  A couple of Little Egrets and a Heron recoded upon arrival and having noted the reporting over the past few days, I soon fund a single Glossy Ibis at the far end feeding alongside a Black-tailed Godwit.  Then, as I made way back on he return journey before the rain might arrive, I found the other three Glossy Ibis at the back of the pool feeding alongside another Little Egret and Heron.  Great sighting even if the light will not enhance the taken photographs. 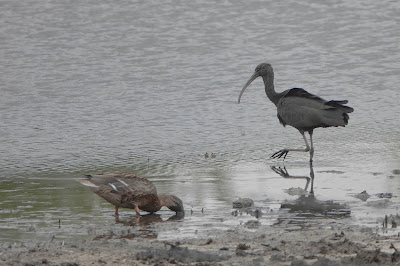 As I re-entered the path running alongside the burnt habitat site of the Dartford Warbler I was at first amazed, then delighted, to see a Dartford Warbler pass low over the path at the very edge of where healthy met ruined gorse and drop into a nearby low bush.  Whilst giving a clear view, unlike the local Stonechats it refused to pose atop the bush.  But, on the other hand, no sign of a Stonechat to offer company.

Moving on back to Hook Pond a second large flock of Starlings swirled over and once on site discovered that most of the Mallards and the male Mute Swan had departed.  However, a lone Cormorant had arrive for a rest and as I moved off a handful of Barn Swallows flew low over the water heading north in the direction of Southampton.  Moving on a single Great Black-backed Gull flew southwards overhead.

Once back on the inlet behind the Spit I found the "missing" Mute Swan and, in addition to the many resting Black-headed and small number of Herring Gulls a single resting Common Gull by way of a pleasant change.  Finally, once back amongst the large feeding flock of Black-tailed Godwits I was able to pick out a few Redshank to take the morning's count to 27 species.

For the latest news follow the Axarquia Birds and Wildlife Facebook page for more photos and comments and the opportunity to share with the wider birding world.
Posted by Bob Wright - The Axarquia Birder at 04:19