Out by 9.30 to walk up the Hamble river to the conservation area and back in beautiful sunshine with clear blue skies albeit a cold wind.  Upon returning I carried on along the shore through the village and almost  out to the spit to see what might be in the bay - and there was plenty.  Certainly quite warm 100minutes later as well as the wind dropping to no more than a light breeze.  Only 24 species recorded but lovely to be out and enjoying the 6km walk.

A couple of singing House Sparrows to see me on my way and, for a change, a calling Collared Dove. Once at the water a small flock of Black-tailed Godwits along with a number of Black-headed plus a couple of Common and the odd Herring Gull.  No sooner had I seen a quartet of Brent Goose than I was seeing score as I made my way upstream.  The first of a half-dozen Curlew and then a pair of Mallard enjoying the company of a handful of Teal.  On the water a pair of Shelduck and the first of the many Wigeon.  A Carrion Crow flew across the track and, again, many more were to be seen. 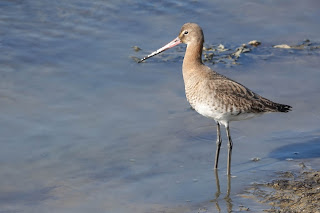 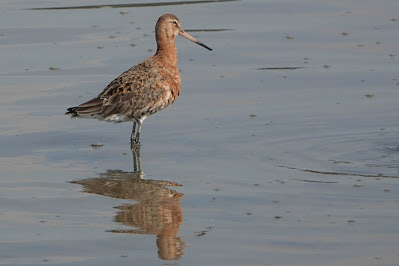 Continuing on up towards the conservation are I soon added a number of Redshank along with at least eight Oystercatchers.  The quartet of Dunlin took more finding as they were on the sheltered edge of the far, muddy island and that, in turn, revealed a quartet of Grey Plover. A lone Cormorant flew down the river and on the water itself, close inshore, a trio of Little Grebes. The conservation area was to add nothing new save a solitary Little Egret on inland the mud flat.

Back to the village and off along the track round the bay where all I managed to add to the morning's list were a Magpie, Wood Pigeon and Robin along with a dozen sleeping Ringed Plovers at the end of my outward walk on the bank of the inlet this side of the spit. 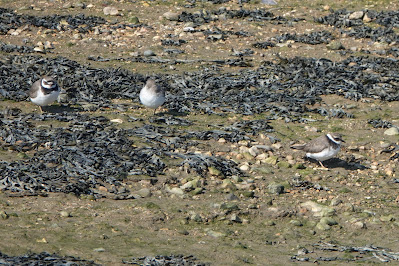