At last a beautiful day with clear blue skies and little wind, even if the temperature was still down in single figures at the start but did rise to around 14C by mid-afternoon.  So off with jenny to the New Forest to explore the highly recommended site of Blashford Lakes just north of Ringwood.  And what a fabulous site it turned out to be and, I suspect, one that will receive regular visits in the coming months - subject to their being any fuel available the way the price per litre has rocketed in the past fortnight.

Whilst parking the car we already had busy Blackbirds, Wood Pigeon and both Great and Blue Tits near the car and then the short walk to the Visitors Centre which produced a Green Woodpecker quickly followed by Carrion Crow, numerous Chaffinches and Long-tailed Tit.

Our first walk was to the Ivy North Hide where the wintering Bittern was to be found, but not by us. A couple of Mute Swans with an almost complete nest, which had also attracted a couple of Coot, and then a Heron dropped in to explore the open channel in the reeds to our left.  Meanwhile, on the wat a lot of activity but, unfortunately, to our right and appearing as distant silhouettes in the very bright, low sunshine.  However, a good number of Black-headed Gulls moving about and a couple of Great Crested Grebes in front of the hide.  Eventually, we were able to locate Mallards and many Tufted Duck along with a good number of Pochards.  On the far side we also found a Moorhen and a Little Egret.

Walking through the trees to the Woodland Hide we picked up a Great Spotted Woodpecker and a quartet of Mallard on a small, shaded pool.  A Nuthatch was working the trees immediately in front of us and, as we approached the hide, an additional bird feeder was encouraging the local Siskins to visit the area.  Once inside the hide, with mainly fixed windows, we soon had the reward of seeing so many visiting small birds tot he feeders along with a Jay that was making the most of a second feeder on regular visits.  Lots of Blue and Great Tits plus the later arrival of a handful of Long-tailed Tits.  In addition to the many Chaffinch, also a small number of Goldfinch and a couple of Reed Buntings.  Both Dunnock and Robin were working the ground areas and later joined by a pair of Blackbirds. The arrival of the Nuthatch was a great sight for all those inside the hide but even more the brief visit of a Marsh Tit.

We stopped opposite the small pool to our right to observe a pair of Gadwall and were also rewarded by the sight of a Kingfisher which eventually moved off to the south. Once inside the hide the sight of many Wigeon and Shoveler along with resting Cormorants, more Mute Swans and Great Crested Grebe.  In addition to Black-headed we also recorded Herring Gulls. 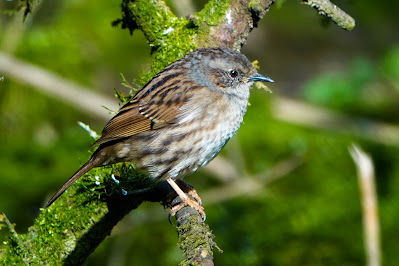 Time to return to the car but not before revisiting the Woodland Hide where a Redpoll had been seen since our departure.  However, a Great Spotted Woodpecker came to work the tree immediately in front and also a Coal Tit.  Recording our missed Redpoll with the warden, I looked up and there at the top of the tree immediately in front of us the bid itself!  Arriving back at the car a Song Thrush dashed across the path in front of me.

Only a very short stop at nearby Tern Hide as all the bird life seemed to be resting at the far end other than a small flock of Tufted Duck.  With the scope we could pick out many Cormorant and Shoveler and also a Magpie on the grassy banks.  However, just before departing we did record a trio of Lesser Black-backed Gulls on the mid-distant waters.  Then it was off to the local pub overlooking Rashford Lake for a light lunch.  Lunch completed a short return to the Visitors Centre an on to Ivy North Hide in search of the missing Bittern.  One birder had found the individual near the Mute Swan's nest but not one of the rest of us could confirm a sighting.  On the other hand, a Little Grebe put in an appearance.

Early afternoon so a slight diversion on the way home to take in two further pools in the New Forest.  First stop Eyeworth recording Starling, Blackbird and Wood Pigeon before noting the many Mallard and just the one Mandarin Duck and  Moorhen on the water.  Still many Blue and Great Tits along with a Robin near the feeders plus many Chaffinches.

A first visit to Cadnam Pond was somewhat disappointing due to a mixture of time of day and many visitors.  However, amongst the Mallard and a couple of Moorhen along with seven Canada Geese we did find a single Mandarin Duck. Again, more Chaffinches and Great Tits.

And so time to eventually set off back to Warsash.  Stopping near Bolderwood we watched a Raven flying past and then not only the expected Chaffinches and Blackbirds but wo sightings of close Mistle Thrushes to bring the day's species tally up to 46.

Posted by Bob Wright - The Axarquia Birder at 04:44