Approaching Osuna just before 9am and a couple of Collared Doves.  Then to the cafe near junction 80 of the A92 where I met up with friends Jerry and Barbara-Ann Laycock for breakfast before heading off into the neighbouring countryside in search of both Great Bustards and Stone Curlews.  I had in mind eight target species with a coupe of possible options to make up the round ten new birds for the year.  Within a hundred yards of setting of, even before the first bend in the road, Jerry had stopped as they spotted a Stone Curlew beneath the olive trees.  I stopped just round the corner in the “usual place” and, sure enough, two very close Stone Curlews and a further dozen in the locality.  With Jerry and Barbara in their car behind me we then saw at least another score fly over the trees as a lone Mistle Thrush dash past below the canopy.

Before moving on we watched a Buzzard drift past overhead at a low altitude and then both Spotless Starling on the opposite side of the road and both a Zitting Cisticola and White Wagtail in the verge ahead.  Within twenty metres of moving on a Red-legged Partridge was seen soon to be followed by very many more.   Lots of Linnets about plus a smaller number of both Goldfinch and Serin .  Meanwhile, on a fence on the opposite side of the road near a load of rubbish, a mixed flock of mainly Spanish but also House Sparrows.  Less than fifteen minutes into our birding adventure and already three of my target birds seen.

At this point Jerry drew my attention to the three close flocks of V-formation Cranes high in the distance moving eastwards.  Then in a bare tree a Black Redstart at the top and as we approached the end of the olive groves onto more open countryside the first of very many Stonechats.  A Blackbird disappeared behind the trees and quickly followed by a pair of Crested Lark, my fourth target bird of the morning.  Having just seen a hovering Kestrel we stopped just beyond the deep culvert directing potential flood water away from the railway line and we found another on top of a farm house next to the railway bridge.  Using scopes we were able to identify the Hoopoe resting on the bridge railings so yet another of the eight targets recorded.

By now there were regular sightings of Red Kite, the most common raptor of the day, and still the occasional Buzzard.  Driving up to the top of the first bridge over the abandoned high speed rail track we had a single Raven in the field and, using scopes, we manage to find 27 Great Bustards in the distance (target bird 6).  Deciding to carry on and follow some of the farm tracks we managed to get much closer, but still a fair distance away, to the Great Bustards.  Only when we stopped to take record photographs did we notice the eight individuals that were hidden in a dip immediately in front of us.  Naturally they were off and away.

Having seen the main flock move away we took a track then farm road off to the left in the hope that the birds might have alighted on the other side of the trees.  A group of six Ravens feeding near the road junction.

They had not but we did find a couple of Iberian Grey Shrikes on the wires (target 7). Starting to work our way back to pick up the main road at overbridge2 we then stopped having found half a dozen distant Great Bustards away to our right.   As we about to move on a local farmer pulled up behind us and asked if we would like him to show us where the main flock was feeding.  Naturally replied in the affirmative.  So a short journey of about 500 metres up and past his farm to a grassed area where we had closer views a group of ten plus another couple of Great Bustards so making a final total of 48 individuals for the morning. 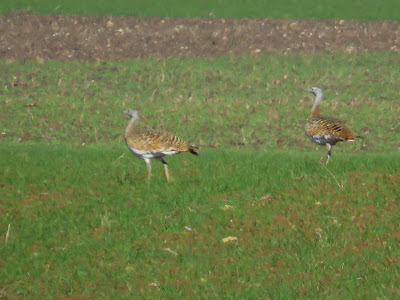 As we finally continued on our way we recorded Sardinian Warblers but nothing, other than more Stonechats, and a couple of White Wagtails noted on the side track taken alongside the rail track.  So onto the far end of the road to try and get a decent view across the fields to the railway viaduct and usually flooded area below.  But just before arriving, having already seen both a Kestrel and another pair of Red Kites, we stopped to check the field to our right and a Black Kite passed low overhead.  Within twenty metres of moving on I stopped, a last minute decision, to take a closer look at the “blob” on top of a pylon and discovered my reserve target, a  Black-shouldered Kite.

Then on down to the bottom of the rise to take a distant look at the viaduct.  Jerry managed to find  a couple of Lapwing on the far side and I picked out the Buzzard resting on the viaduct along with a number of Feral Pigeons.  At this point Barbara drew my attention to the flock of twenty-five white birds flying past the viaduct. Having twisted and turned the birds finally settled and I was able to confirm that they were Golden Plover.  Yet another bonus sighting. Then it was on to take a look a the “hidden pool” in the extensive olive grove just round the corner. What a disappointment to find the pond completely dried up, never seen that before, but as we turned to make our way to La Lantejuela I noticed a couple of male Blackcaps come in to feed on the spilled olives on the ground where the locals were gathering same .

Arriving at the grey water ponds on the outskirts of the village we stopped to check out the main water on the other side of the fence.  Immediately in front of us a couple of Little Grebe and Coots with some very bust Chiffchaffs in the neighbouring trees.  Out on the main water many Flamingo along with a small number of Mallard and Shoveler plus a couple of Pochard.  At the far end a handful of Cormorants were resting in the trees and Crag Martins feeding over the water.  However, the best sighting was the handsome male Marsh Harrier circling over the water.  And that was it.  Having eaten our picnic we decided to start on our return journey towards Malaga as another couple of Red Kites circled above on the opposite side of the road.  And, in conclusion, the only missed target bird was a Corn Bunting and whilst I also did not find any Calandra Larks it was a bonus to see the Golden Plovers.  A most enjoyable day with great company. 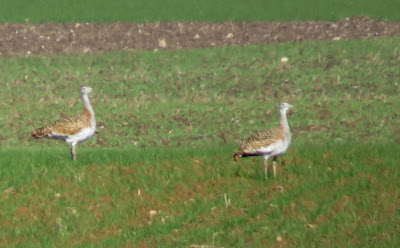 Check out the accompanying website at http://www.birdingaxarquia.weebly.com for the latest sightings, photographs and additional information
Posted by Bob Wright - The Axarquia Birder at 03:20