Collected friend Chris Bell from Stamford railway station and over at Rutland Water to check out the North Arm just outside Burley Ponds by 8.30.  All very sad really as this will not only be my last visit this year but also, probably for many a year as we move south to Warsash on Southampton water.  But at least we had a great five hours plus birding eventually recording 60 species.  And to help things along dry and cool with some occasional sunshine on the warmest day pf the week.

All the usuals such as Wood Pigeon, Carrion Crow and Magpie recorded as we approached the small car park just beyond the private road to give a view of the south shore of the North Arm. A Blackbird flew across the road and on the water we son recorded Coot, Mute Swan, Mallard, Cormorant and both Little and Great Crested Grebe. We next moved half-way up the hill towards Upper Hambleton where we were able to park in the entrance to the lane leading down to the fishing area.  Once out of the car a Robin and Chaffinch and then, wonders of wonders, both a Dunnock and Wren working a large pile of dead cuttings.  Then followed a pleasant walk down across the fields towards the shore before looping round to the left and back to the car.  Recorded on the water the first of eight Great White Egrets to be seen during the visit along with Heron, Greylag Geese, Pied Wagtail, Wigeon, Teal, Shoveler, Black-headed Gull, Goldfinch and Blue Tit. Chris also heard a Mistle Thrush but we were unable to locate the bird.

A great start to the morning then as we headed off to Egleton and the Visitors Centre finding our fits of many Jackdaw as we approached the village.  Welcomed to the car park by a solitary Collared Dove but the feeding area only held Blue and Great Tits along with a single Robin.  Once in the upstairs viewing room we could see that the water levels were still low but the water held Cormorant, Lapwing, Shelduck and Gadwall. A pair of Egyptian Geese were resting on an island as a couple of Mute Swans drifted past and then a trio of House Sparrow.  However, mot pleased to see the arrival of a pair of Pintail.

On this occasion we headed south towards the Snipe Hide.  Whilst there was little initially to be seen apart from distant Mute Swans, Cormorants and a range of the above ducks we did eventually find a resting Buzzard on the water's edge.  But on the main track leading towards the hide we stopped to observe the large number of moving Blackbirds and, in short time, noted the occasional Fieldfare and a small flock of Redwing.  At the same time, a constant movement of Long-tailed Tits through the hedgerow.  Before leaving the hide a small flock of Canada Geese flew westwards in front of us. 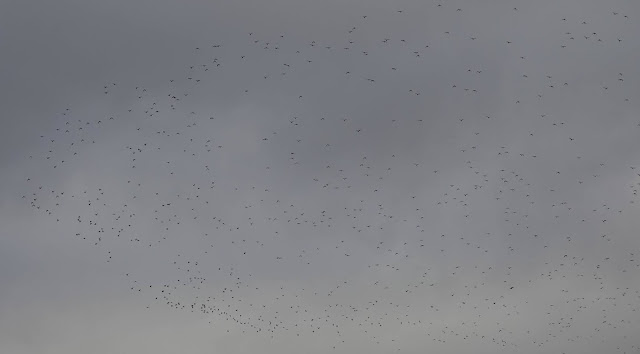 Retracing our steps towards the Visitors Centre we then headed north to visit Lagoon 4 and as we looped around Lagoon 2 we found a quartering Red Kite and not one but two Great Spotted Woodpeckers.  Straight to the Dunlin Hide where we found a flock of approximately 1500 Golden Plover along with very many Lapwing.  Mainly Black-headed but also a few Lesser black-backed and at least a couple of Greater Black-backed Gulls.  Ducks present included Wigeon, Mallard, Gadwall, Pochard and Teal plus a late sighting of Common Gull.

Missing out Sandpiper Hide we went straight to the northern Plover Hide but nothing new added to the sightings.  However, as we approached a Jay flew away from us down the track and upon leaving we heard then saw a Green Woodpecker on the lagoon's bank.

Working back to check Lagoon 3 we settled into Shoveler Hide and were rewarded by more Great White Egrets, Great Crested Grebe and the first Moorhen of the morning.  Lots of Pochard and Lapwing plus a number of Teal and Mallard.  A Pied Wagtail paid a visit to the island in front and looking beyond the Tufted Ducks we were able to identity a pair of Goldeneye.  Checking the resting Lapwings to our left we managed to pick out the single Black-tailed Godwit.  Chris heard another Pheasant and so onto the Lapwing Hide via a short stop at the Crake Hide.  The latter was almost dry but did hold a few duck but Lapwing Hide eventually, at the last calling, produced our first Little Egret of the visit with two seen along with another couple of Great White Egrets.

It was on the start of the return walk to the car park that Chris heard the call of the Cetti's Warbler at the nearby Crake Hide and with a final stop at the Grebe Hide overlooking Lagoon 2 we found a trio of Pied Wagtail and a single male Stonechat.  Also Moorhen, Teal, Wigeon and Mallard on the water. But when looking at the distant Great White Eagle we were also able to uncover the feeding Curlew.

Posted by Bob Wright - The Axarquia Birder at 05:41