Ventas de Zafarraya and its Hinterland

Up at the mirador on the old railway line at Ventas de Zafarraya by 9.15 to walk  the track before it got too hot.  As an added bonus, only one car and a couple of cyclists during the 80 minutes I was on site. Exiting the car I was immediately welcomed by a couple of Goldfinch and as I approached the old tunnel the first handful of a score or more feeding Crag Martins.  A female Kestrel landed atop a rock above me and at my turning point I also saw a male of the species.  I heard before I saw the Choughs and then only the occasional short appearance despite the almost continuous calling.

The tunnel area turned up trumps with a lovely male Black Redstart just before entering and on returning to daylight I turned round and found a female Cirl Bunting on the rocks above said tunnel.  Then the first of a number of Back Wheatears put in an appearance and, as usual, not the easiest of birds to capture on camera.  Also at the tunnel exit a lone House Sparrow and then a House Martin flew past taking the rock edge rather than making use of the tunnel as it headed towards the mirador.

Next up the first of a handful of Sardinian Warblers and then a juvenile Stonechat before finding an adult male.  The male Serin made a lovely sight as it posed on a tall grass whilst  five Spotless Starlings were resting on the high wires to my right.  The silhouette high atop the cliff turned out to be the first Red-legged Partridge of the day as a noisy Blackbird moved away below me.   The next clifftop species was the first of two Rock Sparrows and on the track as I made my way back to the tunnel a pair of foraging Linnets.  Exiting the tunnel I spent some time watching both Crag Martins and Choughs and was very pleasantly surprised by the passing of two Alpine Swifts.

Once back and ignoring the half-dozen Rock Doves and the local House Sparrows and House Martins I set off for the growing fields at the far end of the village and then round the back to take the rock clockwise circuit.  But first a short stop at the irrigation pond where I was delighted to find not just the local Mallards but a couple of Turtle Dove, White Wagtail, Ringed Plover and and a trio of Linnet.  Barn Swallows were feeding over the water and a Collared Dove was both calling and showing behind me. Crested Larks were seen on both the ride to the pond and back to the main road.

The drive along the road towards the old ruined road leading up to Salar produced numerous Common Swifts plus a couple of (Common) Magpie and the first of the Iberian Magpies to be seen on the upcoming circuit.  What a delightful ride this was.  Two Little Owls, and I suspect the first was a well-grown juvenile, followed by a Hawfinch.  I stopped to take particular note of this "large" bird on the fence which I was presuming would be a Woodchat Shrike but looking far too bulky and the wrong "ginger" colour on the head.  No wonder when I got my bins on the bird and discovered its true identity but, unfortunately, it flew just as I was levelling the camera for a quick record shot through the windscreen.

But did I find my target bird for the morning?  I thought that this track would be the most likely to [produce a Northern Wheatear, the Little Owls and Hawfinch were a bonus, but just the one wheatear which I presumed to be a Black-eared Wheatear.  Very strange colouring and looking almost too white below and that unusual head marking suggesting it might in act be a Northern Wheatear but, as confirmed by my friend Mick Richardson, definitely an odd-looking Black-eared Wheatear.

A little further on i stopped to watcha Red-legged Partridge with six chicks and no sooner under way than, less then 100 metres further on, another Red-legged Partridge with newly hatched youngsters.  My last bird in this area was a Chaffinch.  Travelling back a Hoopoe crossed the road in front of me as I reached Trapiche and, of course, I was welcome home by the resident Monk Parakeets! 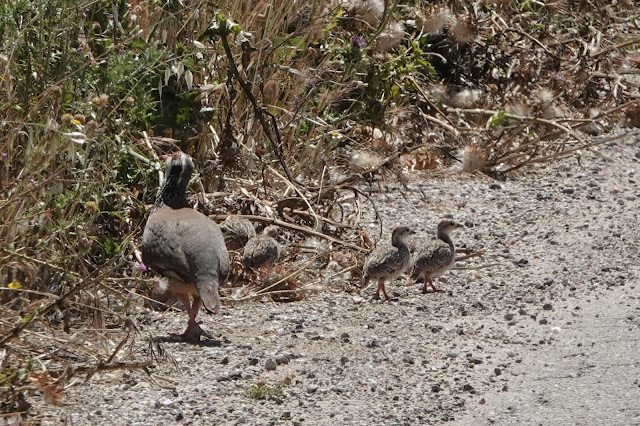 Posted by Bob Wright - The Axarquia Birder at 11:59