The good weather returns and, once more, Dave is out on the local patch with his Arboleas Birding Group.  It certainly reads like a wonderful day's birding and over 60 species recorded by the group.  For me, I can't wait for provincial border restrictions to be lifted so that, once more, I can venture eastwards into both Granada and Almeria provinces.

After three days of miserable weather, it was back to sunshine and a few clouds.  It was also back to our local patch, the Rambla de Almanzora and Vera Playa.  I picked Juda up from the Ballabona service station and we made our way to the rambla, joining it near to the Desert Springs golf complex. Due to the previously mentioned weather, there were numerous pools, not to mention the very large puddles on the embankment track through which we had to drive!
The first pool produced both White and Yellow Wagtails, Shoveler, Mallard, Moorhen and Green Sandpiper.  A small flock of Barn Swallows were flying low above it, with another group of half a dozen resting in a tobacco plant.  We follow a small brook along the centre of the rambla.  We saw a number of Teal, Black-winged Stilt and a couple of Wood Sandpipers.  Small birds included Thekla Lark, Black Redstart, Goldfinch, Meadow Pipit and a few Chiffchaff.  Unusually for this location, a pair of Shelduck flew by.  We added a Snipe, a Hoopoe before I spotted a pair of Little Owls perched in a shrub.
A Magpie was going loopy nearby!  Juda then spotted an Iberian Grey Shrike up on the power line.  At the ford I managed to snap a dapper male Shoveler.
We met Richard and Peter at the parking area.  They had also seen Jackdaw and Collared Dove.  The other seven members started to arrive.  We walked up towards the sewage works, seeing a Woodpigeon overflying.  We heard a Cetti's Warbler and saw a few more Chiffchaff.  It was nice to see a pair of House Martins flying over.  At the sewage pools I found a Common Sandpiper.  The usual gathering of Collared Doves were hanging around the skip.  Kevin spotted a pair of Little Ringed Plovers on the rambla.  John added a Ringed Plover.  Richard saw a Blue Rock Thrush and a Blackbird.  We headed back to the vehicles and then on to the cafe in Villaricos village for a well deserved cuppa, John seeing a Stonechat en route.  We added House Sparrow, Spotless Starling and Yellow-legged Gull as we drank.
We drove down to the beach.  There were some Cormorants on the harbour rocks.  I spotted a Turnstone.  A Sanderling flew in and a couple of Black-headed Gulls were out to sea.  John spotted a distant Gannet.  We followed Ricard and Peter over to the estuary.  They had seen a Great White Egret before we arrived.  There were Coot and Grey Herons to be seen.  Near the beach we could see a group of resting gulls....Audouin's, Black-headed and Mediterraneans.  I also found three Sandwich Terns.  In the same area John added Dunlin and Greenfinch.  Kevin spotted a Kentish Plover.  There was a Little Egret on the beach plus another one on the rocky outcrop with a Grey Plover.
We then convoyed down to the dual carriageway behind Vera Playa.  There, the water level unsurprisingly was quite high.  Amongst the Coot, Moorhen and Teal I found a Little Grebe and a White-headed Duck.  Above us were a few Crag and Sand Martins.  Moving along we added Common Pochard and a flight of their Red-crested cousins.  John found some Shelduck.  I spotted a pair of soaring birds of prey in the distance which turned out to be Common Buzzard.  We could see Greater Flamingos down the far end. John confirmed there were 5 of them when he stopped at the first elevated hide.  We carried on to the second hide opposite the Acuaparc.  A pair of Red-crested Pochard showed well.  There were numerous White-headed Ducks.  Kevin spotted a pair of Gadwall in the reed line.  We ended the mornings birding with a fly past from a male Marsh Harrier!
(PHOTO: David Elliott-Binns) 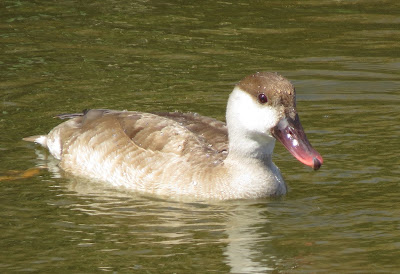 It was great to be back in good company.  A very respectable 61 species seen.  Great birding.
Regards,
Dave
Check out the accompanying website at http://www.birdingaxarquia.weebly.com for the latest sightings, photographs and additional information
Posted by Bob Wright - The Axarquia Birder at 10:10