Invited to join Steve and Elena Powell for a trip over to the Sierra Loja in the hope that we might find both the wintering Ring Ouzels and a possible Golden Eagle, given that both were very visible when seen last week by friends Derek and Barbara Etherton and company.  But we wanted to be on site by 9 which meant leaving Algarrobo Costa at 7.30.  (No problem with an alarm call for 6.30 till I realised, come the morning, that my finger had also caught the time setting so woken up at 4.20 and only when eating breakfast discovered the big mistake!)  But all's well that ends well.

A quick stop for coffee and re-fueling at the start to the track and immediately added Collared Dove and House Sparrows as we set off along the track to the summit.  A Jay flashed away to our right and then the first of very many Stonechats during the morning.  A White Wagtail was seen at the white farm buildings and as soon as we reached the trees a small group of Chaffinches along with a Great Tit.  Lovely to see a Mistle Thrush after what seems like ages.

Working our way up and past the tree line we were soon seeing regular Black Redstarts and then a resting Kestrel.  More Sonechats before a number of Jackdaws took off from the cliffs on our left and, having stopped, we located a lone Peregrine Falcon on the summit appearing to be enjoying its morning meal.. Even better when it took off and moved about five metres, still carrying its "take away," to give a better view.  Suddenly in front of us were a number of Barn Swallows along with many more Crag Martins.  No sooner had we located a handful of Greenfinches on the opposite side of the track and we were on our way again and starting to find regular sightings of Red-legged Partridge.

Well out in the open now and the first Thekla Larks quickly followed by Crested Larks.  Looking above the summit we were able to identify the Golden Eagle slowly drifting away from us.  But still a wonderful sight.  And as the eagle disappeared I picked out the trio of Chough moving along the edge of the escarpment.

Once up and taking the right turn past the Charca del Negra we started to not only see more larks but the first of many Black Wheatear.  Even better, at least three Northern Wheatear in this area.  A stop to check out a large flock of small birds confirmed not just a few House Sparrows but many more Rock Sparrows.  Then we reached the first group of berries and immediately noted the many feeding Blackbirds.  Even a Robin was flitting around in the bottom of the bushes and, again, more Black Redstarts.  It took much searching and a move to the second patch of berry-laden trees to find, in addition to more Blackbirds, the recently-arrived Ring Ouzels.  Usually well out of sight in the dense trees so reliant on their movement for identification, although a trio did break cover to come to rest on the grassy slope to our left.  Difficult to be exact but at least seven Ring Ouzels recorded.

Time to make our way back down the mountain and having insisted on a stop at the main pool at the Charca del Negra we got out to explore the dry hole to discover, as I had expected, that there was indeed a deep pool but hidden from sight up against the retaining wall.  We had already seen a mixed flock of mainly Goldfinches and Serins on the neighbouring fence and now we knew why.   Parking as close as possible, but remaining within the car, we spent considerable time watching these small birds come down to drink and bathe at the water's edge.  Not just Goldfinches and Serins but also very many Rock Sparrows, Chaffinch, Linnets, Corn Bunting and at least four Rock Buntings.

Finally, back down to the bottom of the track for some refreshment before driving home and it was whilst at the bottom that we saw our final bird for the morning when a split flock of Spotless Starlings flew over.

More shots of the Yellowhammer in mixed company: 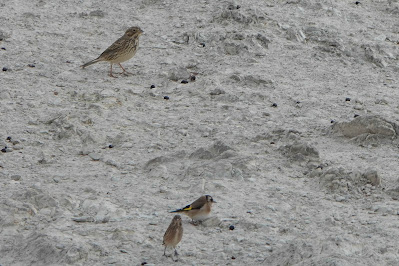 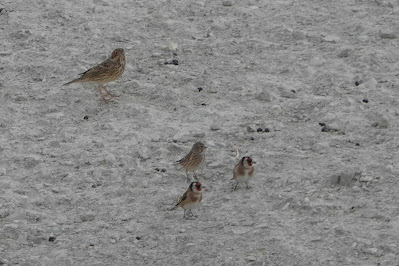 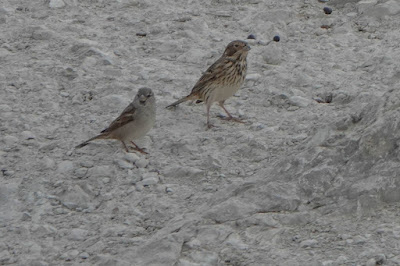 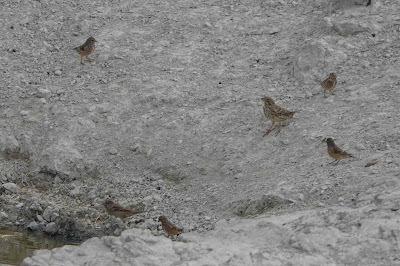 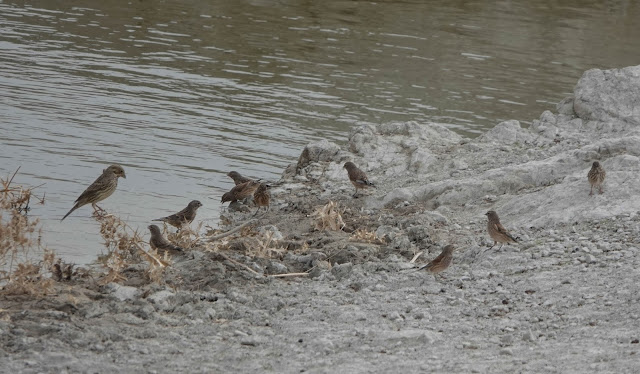 Posted by Bob Wright - The Axarquia Birder at 04:13