Warm and sunny again but slightly cooler then the week-end along with a very light breeze.  Time to pay a visit to Fuente de Piedra, even though warned that most may be closed to the public and then take the farm track across to the back of Laguna Dulce.  Despite the car park being closed at Fuente I was able to observe the flooded entry field and then walk around most of the site albeit very frustrating to find that all paths leading to the hides were closed off.  But first a quick note to record the Raven that crossed the front of the car as I neared the to of the A45 leading towards Antequera.

On the shallow flooded field to the left of the entry road a number of Flamingos, Black-winged Stilts and Avocets along with a score or more Coot.  The odd Lapwing, Redshank and Moorhen plus the feeding Barn Swallows and occasional House Martin plus a quartet of Slender-billed Gulls.


Approaching the board walk from the rear more Flamingos and Avocets and the first of the feeding Gull-billed Terns. A single Blue-headed Wagtail put in an appearance and, as I was walked along the edge of the meadow towards the main mirador, both Reed Warblers and Nightingales were calling.  Once at the mirador the resident Jackdaws put in an appearance and out on the main salina a selection of birds.  Just a few Black-headed Gulls but hundreds of Flamingos to my left and the opposite side a score or more resting Gull-billed Terns and a single Marsh Harrier.  Checking once again the Flamingos to my left I was delighted to find a single Lesser Flamingo showing well.

Making my way back to the car I noticed a few lapwing at the flooded field before setting of on an ant-clockwise circuit of the water.  However, on reaching the distant farm I turned right and took the old farm track towards the back of Laguna Dulce.  This was to prove a successful drive as in addition to a number of Blue-headed Wagtails I also found a single Grey Wagtail along with a number of Crested Larks and Corn Buntings.  A lone Little Owl was resting near the first farm ruin and shortly after a Wood Lark was identified near the edge of the track.

Once at the back of Laguna Dulce I stopped to observe the large number of Coots along with a few Red-crested Pochards about was more excited to discover a couple of Glossy Ibis near some water-bound trees.  More Gull-billed Terns were feeding over the grass edges and so to the far end where I came across more Barn Swallows.  Making my way towards the end of the track I stopped to admire the male Montagu's Harrier that swooped over the car and away.  Goodbye to the local House Sparrows and off to the lay-bye and enter the hide overlooking the water.


To my left another couple of Glossy Ibis and a little further away a resting small mixed flock of Common and Red-crested Pochards.  A pair of Mallard paddled away and out on the main water more Common Pochard a pair of male White-headed Ducks.  No end of Little Grebes, they must have had a fabulous breeding season, along with a quartet of Great Crested Grebes.  Much searching in the distant water also produces a small number of Black-necked Grebes.  Still plenty of Coots and a small number of Moorhen as the Gull-billed Terns fed over the water and then the finding of a couple of Whiskered Terns to add to the morning's list.  Both Blackbird and Hoopoe were found below me to my left and then more Reed Warblers and both Goldfinch and Serin.  Perhaps my final bird was not the couple of Lapwing but a very noisy Cetti's Warbler.

A slight diversion on the way home took me to the village of Mollina where I found Blackbird, Hoopoes, Barn Swallows and Collared Dove but not the hoped for Rufous Bush Robin. 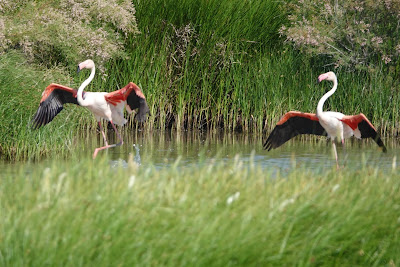 Check out the accompanying website at http://www.birdingaxarquia.weebly.com for the latest sightings, photographs and additional information
Posted by Bob Wright - The Axarquia Birder at 13:51