Nothing but rain, rain and yet more rain since arriving back in the UK on Wednesday evening.  Might, perhaps, be classed as the "reign of the rain" for want of a better description.  But today the forecast suggests that we could get a dry spell by mid-morning and even a glimpse of the sun so, naturally, I took the opportunity to pop over to my local patch at Rutland Water.  And my word was it wet underfoot wherever you looked.  So, rather than get covered in mud I concentrated on first the North Arm where I could use the scope on the Burley Fishponds, followed by a stop at the Visitors Centre to check out the feeding station and Lagoon 1 and 75 minutes later I was off to check out the winter-closed Lyndon Centre.  Seeing the nearby birds on the water as I drove home I also made a fifteen minute stop to check out the birds on the water at the dam and was well rewarded.

Approaching the Burley Fishponds I saw the first Carrion Crow of the day and immediately noticed the number of Mute Swans on the water itself.  Not that many birds about and the ducks were mainly Wigeon and Tufted Duck along with the occasional Mallard. Just a handful of Cormorant and Great Crested Grebes plus a few Black-headed Gulls.  On the far side I noticed a single Great White Egret which also drew my attention to the nearby handful of Teal.  On the nearby main water I also picked up both Canada and Greylag Geese at the water's edge.  Also present a couple of Redshank resting on a twig poking up from the water near the bank.


As I departed I noticed the large number of Black-headed Gulls and Jackdaw feeding in the nearby sodden field along with a couple of male Pheasants.  Once at the Visitors Centre I went immediately to the feeding station and soon became aware of the many Blue and Great Tits making good use of the full feeders along with a couple of Rats picking up the dropped seed below.  Very quickly the tits were joined by both Chaffinch and Goldfinch and Robin came to visit along with a pair of Dunnock.  A few Blackbirds were active at the back and a single Moorhen was on the small pond watched over by a quartet of Collared Doves with Wood Pigeons in the nearby trees.


Time to enter the Centre itself and check out the water in front and immediately aware of the large number of Lapwing present.  Ducks were mainly Shoveler but the white of a male Smew soon caught my attention and also revealed a couple of females.  Loads of Coot on the water along with a number of Cormorant and then the Pochard flock sailed into view.  Just when I thought I had recorded everything a lovely Pintail came into view.  Returning to the feeding station on my way back to the car I also manged to record both Coal Tit and House Sparrow. 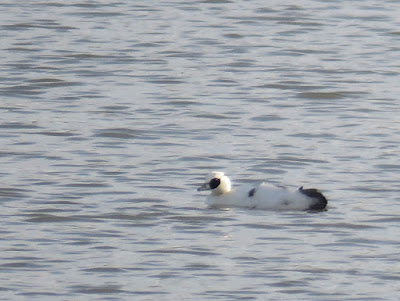 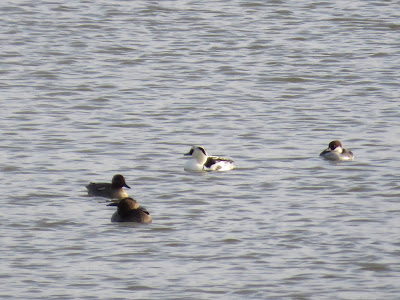 My intended final stop of the morning was the Lyndon Centre where I spent a most enjoyable twenty minutes or so watching the activity around the feeders next the the small pond.  In addition to the half-dozen Mallard on the water there were also three Egyptian Geese and a Moorhen present and then the small birds put in an appearance.


Lots of Blue and Great Tits with the occasional visit of a Marsh Tit.  Mainly Chaffinch and Goldfinches but also a good representation of Greenfinches before both Robin and Dunnock put in an appearance and even a female Yellowhammer.


Making my way home  as I left Edith Weston I had a Magpie in the field on the right and immediately a small number of Rooks crossed the road towards the water.  Seeing the number of birds on the water I pulled in to the closed drive down to the dam to check out what was present.  Apart form the number of Tufted Duck I also picked out both Little and Great Crested Grebe along with a couple of male and accompanying Goosander.  Lovely.  To the left a pair of Little Egrets had landed and to my right I also found a couple of Gadwall so giving a final tally of 44 species in just under two hours birding. 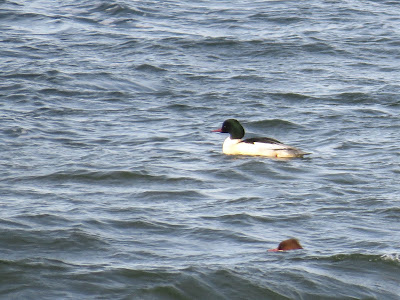 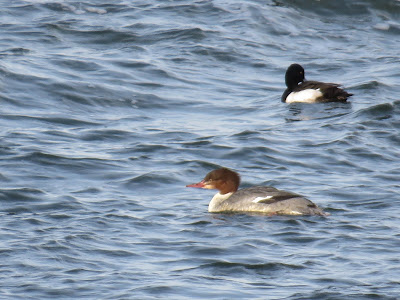 
Check out the accompanying website at http://www.birdingaxarquia.weebly.com for the latest sightings, photographs and additional information
Posted by Bob Wright - The Axarquia Birder at 07:23