Up early and on the road accompanied by Derek to make our way down to Tarifa to check out the autumn raptor migration.  A quick stop for breakfast and on site at the Cazalla viewing stage by 10 0'clock.  Sunny but also a good easterly breeze and much mist over the Strait with the island off Tarifa barely visible and no sign of the African coast.  Whereas lat Monday there were thousands of raptors to be seen, today's visitors could be counted by the score rather than hundreds and certainly no sign of reaching thousands.

Given this situation mainly Booted Eagles and Egyptian Vultures with probably a dozen of both Honey Buzzard and Griffon Vulture.  The day had started well with a handful of Pallid Swift seen as we passed through Estepona and the odd one in Tarifa.  A Griffon Vulture as we passed the mirador approaching Tarifa and even a male Blue Rock Thrush. A Sparrowhawk was working the bushes on the slopes below and a distant Kestrel before a lone Marsh Harrier passed across our viewpoint. 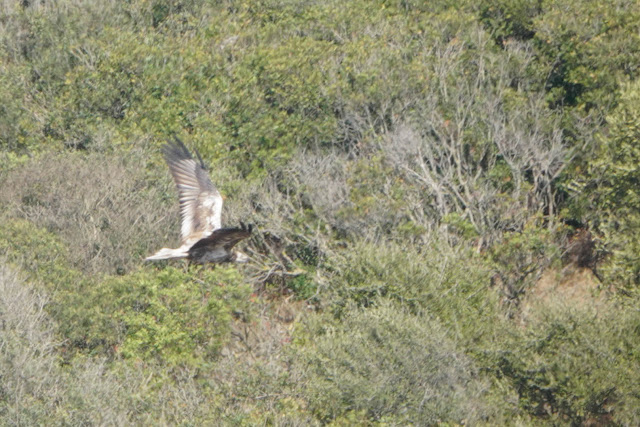 A pair of Raven were resting below us and, again, many of the Egyptian Vultures including a number of juveniles were also taking advantage of the shelter of the valley to take short rests.  In front of us a pair of Stonechat followed by a Crested Lark and then the surprise appearance of a Sedge Warbler.  Above us the occasional Barn Swallow and a passing couple of Cattle Egret.  At this point we were delighted to see a small flock of about 50 Bee-eaters pass over and as the mist lifted revealing the African coast so the Griffon Vultures began to put in an appearance along with another lone Honey Buzzard and more Black Kites.

News arrived that more was being seen further east at the Algarrobo view point so we made our way across picking up a Common Buzzard on the way.  Once at the site, more Griffon Vultures and a lone Montagu's Harrier.  A Short-toed Eagle drifted overhead and both Common and Pallid Swift were recorded.  Even another small flock of migrating Bee-eaters.  Finally, a single Red-rumped Swallow and then a pair of White Stork as we approached Algeciras. 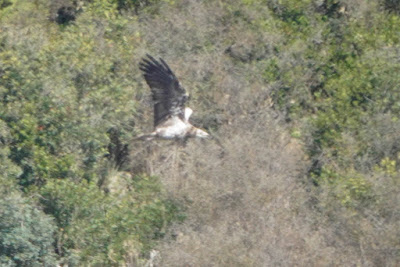 
Check out the accompanying website at http://www.birdingaxarquia.weebly.com for the latest sightings, photographs and additional information
Posted by Bob Wright - The Axarquia Birder at 09:15