What a day weather-wise!  I left home in clear blue skies, calm and early morning sunshine to be at the Guadalhorce by 9 o'clock. Reaching Malaga I was not only stuck in very heavy traffic but then came the torrential downpour.  What to do?  Head for the airport and then on to Zapata where at least I could bird from the car.  And what a mess this site was.  Very large deep puddles and having just got through I was then confronted by thick, sticky mud before reaching the river itself.  Lots of Barn Swallows and a few House Martins feeding above and both Mallard and Red-crested Pochard on the water immediately to my left.  The Collared Doves, Jackdaw and House Sparrows were noted as I left the village itself and, as expected, a number of Crested Larks feeding on the gravel area.

Before heading off along the track to the reed-bed area I also recorded a Black-winged Stilt and a couple of Little Ringed Plovers.  A Blue-headed Wagtail dropped in and I saw a couple of Moorhen paddling across the river above the weir.  Blackbirds, Goldfinch and Serin as I drove along the track and even a Corn Bunting sat on the high fence next to the track.  Cetti's Warblers were calling now that the rain had stopped and the sun was shining and then a handful of Linnet in the opening in the reeds as the birds came down to drink.  But then the sight of the site.  In the narrow gap used by the ringers a Water Rail was making its way along the ground and straight after a Robin on the path in front of the car quickly followed by a small flock of Spanish Sparrows before reaching the exit from the track.

So, with a smile on my face as the morning warmed up I made my way through the airport and over to the Guadalhorce where I was greeted by a Booted Eagle in the bare tree as soon as I reached the river bank.  A lone Little Egret few upstream and, as expected, there was a handful of Rock Doves in their usual resting place under the motorway bridge.  Crossing the footbridge I saw my first Red-rumped Swallows of the year as they fed over the water along with both Barn Swallow and House Martin.

So on to the Laguna Casillas where I found 14 Common Pochard, a Little Grebe and a couple of Moorhen and Coot.  The Wader Pool produced a dozen Black-winged Stilts and a group of nine Redshank along with a single Greenshank, Common Sandpiper and a couple of Little Ringed Plovers.  More Black-winged Stilts on the Rio Veijo (Old Rover) as well as a dozen Sanderling, a few Dunlin and a pair of Avocet.  Also present very many Kentish Plovers and a few more Little Ringed Plovers.

Walking to the beach I encountered a male Sardinian Warbler but the flat, calm sea only produced a couple of Cormorant and a single Sandwich Tern.  However, the return walk back to the Laguna Escondida did produce a Kestrel and an over-flying Hoopoe as well as the sight of a Woodpigeon in a tree top, not a usual sighting for this site.  Only the three screaming Monk Parakeets and then I was at the latest laguna.


The Escondida was very quiet with just the single Little Grebe and a pair of White-headed Ducks.  However, from the hide I did see my first Woodchat Shrike of the year.


So, finally, on the main hide overlooking the Laguna Grande which held a surprising number of Cormorant along with eight Herons.  Saving the gulls for the end, I counted a dozen Shelduck and four resting Cattle Egret before noting the handful of Kentish Plovers on the scrape in front of the hide.  A little disturbance revealed an active territorial squabble between Black-winged Stilt and Ringed Plover.

Then to the gulls.  At least forty Black-headed Gulls and a handful of resting Sandwich Terns but closer inspection revealed the single Bonaparte's Gull which has been on site for the past three days.  Likewise, I also found a trio of Slender-billed Gulls and maybe half a dozen Mediterranean Gulls.  Photography not helped when the weather decided it was time for further heavy rain for thirty minutes.


Eventually leaving to make my way back to the car and home my last new bird of the morning was a female Marsh Harrier and then the Booted Eagle back in its tree to watch me depart having reached a total of 42 species in the three hours here plus, of course, the 22 species recorded at Zapata and a total of four new birds for the year. 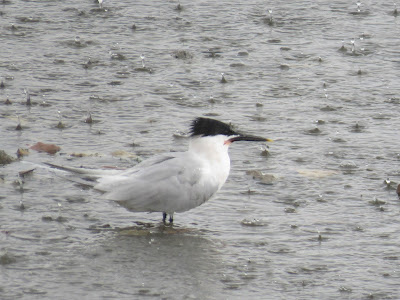 Check out the accompanying website at http://www.birdingaxarquia.weebly.com for the latest sightings, photographs and additional information
Posted by Bob Wright - The Axarquia Birder at 09:16