Having driven down to the Cabopino marina east of Marbella with Steve Powell in the hope of seeing the visiting Snow Bunting and dipped, we came home via the Guadalhorce reserve in Malaga in the hope that the late afternoon arrival might coincide with sight of the wintering Short-eared Owls recently reported.  Again, we were unsuccessful so carried on to the Laguna Grande to see what might be about.  Quite encouraging to think that we recorded 33 species in our stray of well less than an hour.

We were greeted by House Sparrow and Monk Parakeet and as soon above the western arm our first couple of Plack Redstarts.  Cormorants travelled to and from the main water and in with the Spotless Starlings in a nearby dead tree a single Common Starling.  Having crossed the footbridge to make our way to the main hide overlooking the Laguna Grande the Spotless Starlings took off one way as a Sparrowhawk dashed away in the opposite direction.  Another Black Redstart and then a couple of White Wagtails on the track before we reached the hide.


From the hide it was obvious that the Cormorant colony counted over one hundred individuals and we managed also to find both Cattle and Little Egrets plus a single Grey Heron.  Collared Doves on the trees along with more Spotless Starlings and then to look at the water

Eleven Shelduck and ten Black-necked Grebes counted but the Shoveler population had diminished since my last visit and just a couple of Mallard and Common Coot.  Immediately below the hide we had a single Greenshank along with a Common Sandpiper and half-dozen Black-winged Stilts.  Both Chiffchaff and Spotless Starling were probing the grasses.  A little further back a quartet of Dunlin were feeding with a single Ringed Plover.

At the far island with the dead tree a Whimbrel was feeding close by and, on checking the photos, I was able to establish that the two smaller waders were Black-tailed Godwits along with a single Kentish Plover.

By way of excitement we watched a Buzzard hovering and then a male Marsh Harrier trying to take a Cormorant from the top of the "Osprey " pole.  Obviously a bird with bigger eyes than stomach as the Cormorant seemed not to be too bothered by the harrier's efforts. 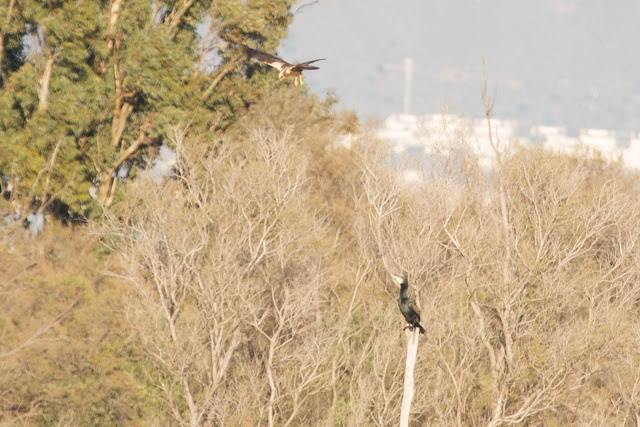 There was small a number of Yellow-legged Gulls on the water when we arrived and before departure a larger number of Black-headed Gulls had arrived.  Just the occasional Crag Martin feeding over the water and as we set off back to the car a Robin put in a brief appearance on the track.  Finally, not just a female Kestrel roosting but a Booted Eagle passed over.

I used both my EOS 7D with 100-400 lens and the small, lightweight canon SX60 on the same subject to make a comparison before deciding which, or both, cameras to take on my upcoming visit to Borneo.  Impressed when I saw the results of the small camera and, I must admit, disappointed with the results from the larger camera.

Check out the accompanying website at http://www.birdingaxarquia.weebly.com for the latest sightings, photographs and additional information
Posted by Bob Wright - The Axarquia Birder at 00:49