Off to the airport to collect visiting son so time for a couple of hours at the Guadalhorce before the flight's arrival.  Greeted on arrival by a male Blackbird and another couple seen as soon as I reached the eastern arm.  On crossing the footbridge just the single Little Egret and a solitary members of the resident Rock Dove community under the motorway bridge so straight on over to the eastern arm.  As I entered the nearby avenue a White Wagtail on the track and a quartet of Stonechat to my left.  Just the one, initial, Cormorant flying into the reserve but a Hoopoe was flying north low over the vegetation opposite the Luguna Casillas.  The water itself held almost a score of Coot along with a trio of Shoveler and a pair of Little Grebe.  Resting in the bare tree to the back right was a lone Booted Eagle which departed before I could extract my camera having been disturbed a by a couple wandering along the back.

Moving on down to the Wader Pool I had a small number of Chiffchaff foraging in he nearby trees and, right on time, a fly past a group of creaming Monk Parakeet.  Goldfinches were heard and seen as I approached the hide but the water proved to be very disappointing with just a single Black-winged Stilt, a couple Shoveler and three Little Grebe.  Plenty of Spotless Starlings in the distant trees along with a single Peregrine Falcon in the "Osprey tree."


Moving on down towards the Sea Watch the old river level was very high as had been both previous pools so not surprising that no waders to be seen other than a quartet of Black-winged Stilts.  A Cetti's Warbler was calling and at the back of the stony ground to my left both a Crested Lark and single Meadow Pipit were recorded. A Grey Heron drifted in to the sheltered water and a male Sardinian Warbler put in an appearance.  The sea itself was calm and bathed in brilliant sunshine with a quartet of Black-necked Grebes at the mouth of the eastern arm of the river and a very large raft of Lesser Black-backed Gulls to my right (west).  Whilst checking out the the distant sea I had the joy of a couple of jumping Dolphins about two-thirds of the way to the horizon  - but still a very pleasant experience which I was able to share with a small group of visiting cyclists.

Working my way back and on to the Laguna Escondida a handful of Serin caught my attention opposite the Wader Pool and a Buzzard drifted over, barely five minutes later than having watched the circling Booted Eagle.  Approaching the hide two female Black Redstarts and a House Sparrow were feeding on the ground and once ensconced I could not but notice the handful of feeding Blackcaps to my left.  On the water a Moorhen, a couple of Little Grebes, four Teal, a single female Mallard and at least a dozen Shoveler plus a well-concealed Heron at the back of the water.

So on to the main hide overlooking the Laguna Grande.  Here we had approaching a hundred Shoveler and a handful of Gadwall plus another single Mallard.  A dozen Black-necked Grebe were on the far side of the nearby island and to their left the main resting colony of Cormorant which totalled at least thirty individuals but also including six Flamingo.  A Kestrel rested on the pole to my left along with a few Spotless Starlings and a couple of Collared Dove but immediately in front of me the feeding quartet of Black-winged Stilt along with a similar number of both Sanderling and Ringed Plover and a single Greenshank.  A pair of Common Pochard drifted across the back of the water and, at last, a couple of feeding Crag Martins skimmed down in search of an early lunch. 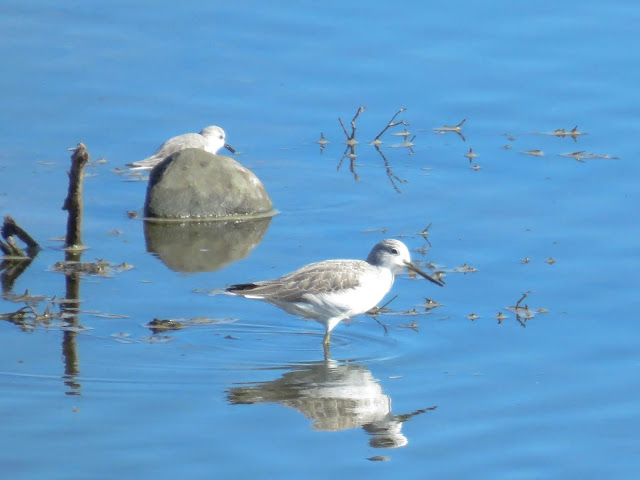 So, about two and a half hours and a total of 42 species recorded.  Yet again, no sign of a White-headed Duck and the Wigeon seen last month were no longer present on the Escondida.


Check out the accompanying website at http://www.birdingaxarquia.weebly.com for the latest sightings, photographs and additional information
Posted by Bob Wright - The Axarquia Birder at 08:46