Awake early so up and down to the Rio Velez outside Torre del Mar arriving at 7 o'clock and still completely dark.  No sign of any Nighjars on the track and, as the light slightly improved, I could see the Cattle Egret roost from the hide with at east 100+ individuals present.  As expected, Blackbirds were first on the scene as daylight broke followed by some very noisy Cetti's Warblers and the occasional sight of a bird moving between the reeds to the front.

A walk to the beach revealed that there was a good-sized lake at the mouth of the river with at least 50 Mallards present on the water.  Again, over 50 House Martins seemed to take to the air from the reeds (or were feeding on mass) and then the low-feeding Pallid Swifts with at least twenty present.  The first Black-headed Gulls appeared overhead and a single Common Coot put in an appearance.

So back to the hide to see what might be moving about to discover the owners of the parked car at the site when I first arrived.  As I suspected, the local ringers were present and on this occasion it was Juan Ramirez and his trainee Anna from Malaga.  They were retuning from the nets with three birds; a Reed Warbler, Cetti's Warbler and a Bluethroat already wearing a Dutch ring.  Having completed the ageing, sexing and measuring, the birds were released and we three took a walk back down to the beach passing a small charm of Goldfinch on the way.  Juan then informed me that he often finds Red-necked Nightjars resting on the warm beach, picking out their red eyes with a torch - but not this morning. 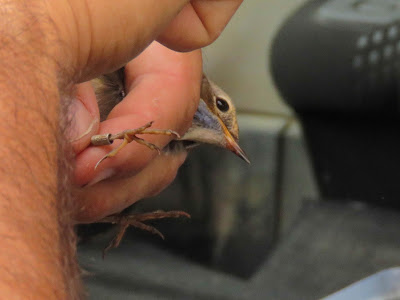 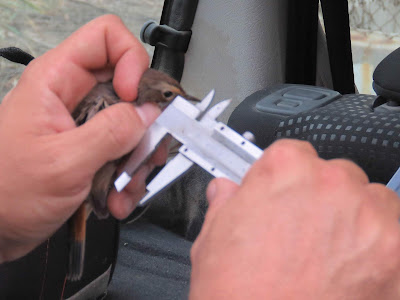 Feeding over the water we now had good numbers of both Barn and Red-rumped Swallows along with the occasional Sand Martin and a few House Martins.  In addition, there were still Common Swifts to be seen.  A Purple Swamphen made a fast and heavy flight across the top of the lake where the waters narrowed.  Meanwhile, out at sea, a couple of large fishing boats were making their way back to their home port of Caleta de Velez and followed by many gulls, mainly Yellow-legged but also both Lesser Black-backed and a number of Black-headed Gulls.  Also with the gulls were at least 20 Balearic Shearwater and Juan also manage to find a Cory's Shearwater.

No sooner had Juan commented on the lack of recent sightings/hearings of Little Bittern than one called from the reeds to our right as we looked up river.  A Kingfisher crossed from the left and then the Little Bittern flew across the water to rapidly disappear inside the reeds.  Above us a couple of hovering Common Kestrel and then a score of Rock Doves wandering westwards.  A handful of Sanderling flew westwards close to the shore and then a Night Heron at the far end of the lake making its way upstream and a dozen Little Egrets arrived from the coast.

Back at the hide we had close views of a couple of Hoopoe and a score or more of Spotless Starlings were feeding in the immediate area.  Time to re-check the nets and then bring back almost twenty more small birds for scientific analysis.  Walking back to the hide we had three Honey Buzzards circling overhead.  Mainly Reed Warblers but also a good number of Cetti's Warblers, a second ringed Bluethroat, this one bearing a French ring, a single juvenile Subalpine Warbler, a female Greenfinch and a juvenile Penduline Tit.  These small tits look very small when seen in the wild but in the hand they appear even smaller with a weight of just a fraction over 8 grams.  Behind us we had the sighting of the first of about eight Short-toed Larks and a trio of Serin.


Then the rains started.  Juan went back to the nets, almost complete protected from the wind and light rain by the high reeds and bamboo, and returned with a few more warblers including a Blackcap.  He also reported that on arrival he found both a Snipe and Teal sheltering from the rain under the reeds at the water's edge.  A Collared Dove flew over and, as might well be expected, we had an overfly from five of the local Monk Parakeet population. 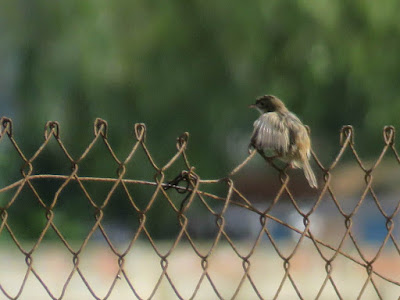 Time to finally say goodbye and make a quick check in the fields upstream of the  road bridge.  Greeted by a Great Tit and on reaching the track above the dry river bed a good view of a female Pied Flycatcher.  Similarly, a quick circuit of the arable fields produced both Crested Lark and a wet Zitting Cisticola trying to preen and dry itself on the adjacent fence.

Check out the accompanying website at http://www.birdingaxarquia.weebly.com for the latest sightings, photographs and additional information
Posted by Bob Wright - The Axarquia Birder at 12:08