Zapata and Teba Gorge with Derek and Company

First Dave and now Derek with super reports from yesterday.  I suppose I ought to add that Steve Powell popped down to the Guadalhorce on Tuesday morning whilst Elena was at the hairdresser getting all spruced up for yesterday's departure to the UK for a couple of weeks and managed to find the Spotted Crake and large flock of Black-necked Grebes.  But more about this later when I report on my visit this morning.  As for Derek and company, if I am to reach these standards then I shall have to go into serious training to meet the early morning starts!!  No breakfast but, then again, with Derek he always knows where to find a cracking egg-butty!  Great report, so read on.

Morning Roberto....Yesterday we arranged to meet Jerry and Barbara Laycock at early o'clock, well not too early, 0715hrs to be precise, to see if the Red-necked Nightjars had returned yet to Zapata.  It was 26 March last year we had recorded our first bird, but last spring, of course, was warmer and not quite so wet.

As it was just Jerry showed, with Barbara (the other one, not my dearly beloved (I have to say that!) laid up with cold) so we three drove the short distance to Zapata to start the day.  How lovely to feel slightly warm as the northerly winds at last had dropped, although it was only showing 7C on the thermometer!

Still dark we started to look for the days target bird by driving the well known track 2 or 3 times, with some difficulty I must say after all the recent rain (18 months worth in March alone).  But the good old X-Trail 4x4 copes well with this terrain, just as well it knows it inside out.  Even though still dark Cettis Warbler called the day and we scattered some Crested Larks from the track - but no sign of the nightjars yet, perhaps they knew the weather conditions.

So we made our way down to the river, now nearly back to a more normal flow, and witnessed a dozen or more Night Herons returning to their daytime roost on the opposite bank.  A couple of Little Egrets were also visible as were Mallard, Moorhens and Coots.  Still dark, but with a promise of daytime in the eastern skies, we noted Common Sandpiper and 3 Little Ringed Plovers busy feeding and showing well in the car's headlamps.  Soon Serin and a Great Tit called the day and then one of the wintering Greenshanks flew on to the top weir.  The Jackdaws exited the motorway bridge roost as did the Common Kestrel that usually nests there.  A Green Sandpiper, then 2, joined the Common Sand feeding in front of us.

By now dawn had broken and Goldfinches, Spotless Starlings and House Sparrows were visible.  The nightly large roost of Cattle Egrets started to disperse, flying over us in groups of up to 12 birds.  A Yellow Wagtail (Blue Headed - Iberian) appeared in front of us, and in the nearby bushes Sardinian Warbler, Zitting Cisticola, Corn Buntings and Greenfinches were observed.

Leaving the river bank (anyone reading this - don't cross the ford yet, unless you have a tractor) we headed up to the top track, now in daylight, to continue birding.  Barn Swallows and House Martins were active over the reed bed, but the Red-rumped Swallows seem not to have reappeared yet this season.  We could hear the Common Waxbills below us but it was still early, maybe too early for most birds.  Waiting at a spot where the Aquatic Warbler was ringed in February we heard our first Reed Warbler of the year.  Then we saw it, low down in the battered reeds, and then, was it the Aquatic?  For a warbler small, striped head suddenly showed in the same area.  It stubbornly refused to turn to show its back markings for what seemed an age, preferring to face us and preen itself.  Then it turned - and - no, it was a Sedge Warbler, still nice to see but a slight disappointment to us.  So I've still only seen Aquatics in Poland - one day perhaps in Spain.

By now the sun was up and some warmth was felt by us and a decision was made to push on to new grounds - but not without breakfast first!  Leaving the reed bed we also noted Collared Doves.

We stopped at El Cruze at Ardales for desayuno, always a good bacon sarnie here for those that don't want the traditional, before continuing to Teba, and the rock face.  Almost immediately we spotted a Peregrine Falcon (male) harassing the Rock Doves.  It was soon joined by its mate and they gave a fine display of joint hunting techniques.  Several Choughs appeared and Crag Martins were spied flying close the the rock face.  A lone Griffon Vulture flew over and both Black Wheatear and Blue Rock Thrush were 'scoped on the top of the rocks.  Behind us, on the now freshly filled embalses we viewed the usual Great Crested Grebes.

Moving on we glanced to see if the vulture feeding station was active, but obviously fresh supplies were needed.  We stopped at an old site we used to use before Campillos to view the flooded fields.  Plenty of close by Greater Flamingo, Shelduck, Shoveler, Black-headed Gulls, a solo Lapwing, Black-winged Stilt and a fly past of 15 Glossy Ibis.

Proceeding to the off road track nearby we went in search of the recently returned Montagu's Harriers.  No disappointment here, soon found and we clocked 4 males and 2 females all displaying their wonderful courting techniques.  We 'wasted' an hour or so just watching these magnificent birds and it seemed they cared little for our presence flying directly over us at times.  I must admit to trying to photograph them but a bridge camera is not the easiest tool to use in these circumstances, so I tried it on video setting - now all I need do is convert them to Mp4's. 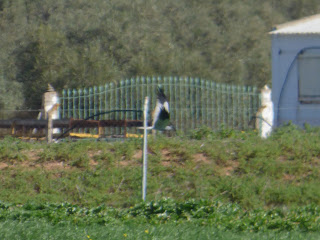 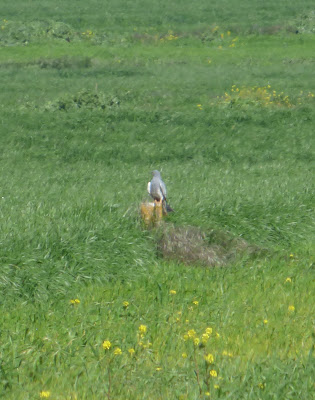 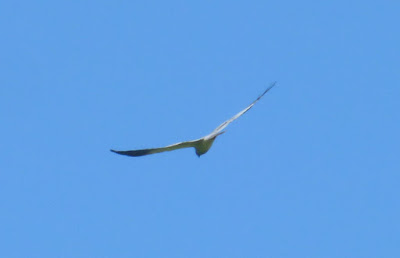 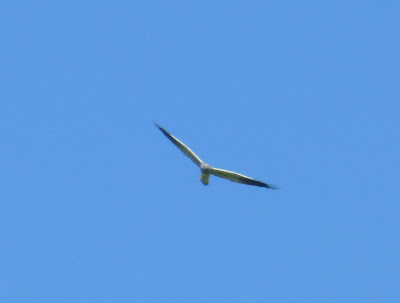 We eventually pushed on noting dozens of Yellow Wagtails (mostly Iberian, but 2 were flavissima), Crested Larks on the path and Booted Eagles in the skies.  Large flocks of Calandra Larks displayed well in the fields and a couple of Stonechats joined the numerous Corn Buntings.  Skylarks were singing and 2 Woodchat Shrikes were very visible close by.   Further down the track (at the moment only passable with a 4x4, or a prayer to your particular god!) we found a solo Little Bustard close by in one of the flooded fields.

Carrying on to Fuente de Piedra we were aware of Semana Santa and the fact schools were closed, the sun was out - so were the families!  Didn't stop us though and we recorded both Whiskered and Gull-billed Tern, Lesser Kestrels were also in the skies.  The water area before the visitor centre contained many Black-winged Stilt, Avocet, Redshank along with the many Coots.

Parking up we walked to the higher level and viewed both Teal & White-headed Duck.  Eventually we located the sought after Garganey some way out on the lake, 6 in total.  The flamingo's seem very happy with the recent water supplies dumped on them, let's hope for a good breeding year.  Walking round to the laguneta a Marsh Harrier past overhead.

So calling it a day we drove back to Alhaurin having been happy with the days tally of 76 species, now all I have to do is convert these Mp4 files!

What a super day, Derek. Possibly more birds seen than some of our friends have seen all month if not year.  And what a fabulous selection and confirmation that summer really has arrived with sightings of the terns, Montagu's Harriers, Lesser Kestrels, etc.  Not long now then and we can also expect Bee-eaters, Rollers and, of course, the awaited Red-necked Nightjars down at Zapata.

Check out the accompanying website at http://www.birdingaxarquia.weebly.com for the latest sightings, photographs and additional information
Posted by Bob Wright - The Axarquia Birder at 08:48