Two birding days this week starting today with a visit to RSPB Frampton Marsh on the outskirts of Boston, Lincolnshire followed by the relatively short drive to the other side of the town to visit the Freiston reserve.  It seemed a good idea at the time to stay closer to home as I recover from my "man flu" rather than drive over to north Norfolk.  So, there I was at Frampton before 9 ready to check out the birds with clear blue skies and a low, blinding sun and no wind at all to speak of.  On the other hand, stepping out of the car I realised that the temperature had recently crept up to 1C and by late morning had reached the dizzy heights of 3, if not 4C!  Mind you, as the temperature rose to these astounding heights so the wind picked up to deliver a cold breeze and so remind foreign-living birders that this is not jumpers-only never mind short-sleeve shirt weather so make sure you have plenty of layers about the person; even make the Sierra Loja feel like the Caribbean! 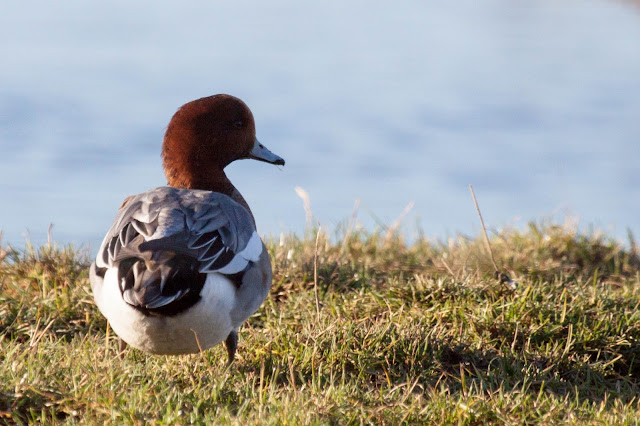 Crow, large number of Rooks, Pheasants and Blackbird as I drove through the site to park at the end of the track and check out the steep bank and its grassy fields to the right and scrape to the left.  Thousands of Wigeon on site either resting or grazing along with large numbers of Canada Geese and a few Greylag.  Stopping to take a closer look a a few of the "strange" Canada Geese I realised that we also had 25 Barnacle Geese in the narrow channel and further away a very small flock of Pink Foot Geese.  All with the sun behind me so enabling me to scope to the far side of the grass where I found not only scores of Lapwing but also a small number of Golden Plover.  On the other side of the road the scope revealed even more Wigeon along with a few Mallard and Shoveler before I found a good number of Teal.  A lone Moorhen popped out of the pond for a little walk along the bank and then, by way of a change, my first wader of the morning with a single Ruff.


From the\ top of the bank looking down onto the marsh I counted at least an hundred Brent Geese which, having been disturbed (I was later informed that a Marsh Harrier had flown over the area), took off and headed into the reserve where the total must have doubled as they revealed more of the same.  A couple of Redshank were also seen as I looked down onto the scrape.  Walking back to the car I soon added Shoveler and a pair of Reed Bunting before parking in the "proper" car park, entering the Visitors Centre for a warming coffee to check out the feeding station and then undertake a clockwise walk taking in all three hides.  The feeding station was relatively quiet did was providing much nourishment for a small charm of Goldfinch, a few House Sparrows  and a handful of Chaffinch.  The water in front provided mainly Wigeon and Teal with a few Mallard but also a number of Shelduck, two Herons and three Mute Swan, whilst almost hidden away in the far reeds was a lonely Little Egret.

All very quiet until I arrived at the far hide but, apart from a lone Redshank, just mainly Brent Geese and a few more Shelduck.  At lease I did pick up three Black-tailed Godwits whilst visiting the Reed Hide and the 360 Degree Hide was noted, yet again, for Brent Geese, Wigeon and Teal.  In the distance I found the flock of Barnacle Geese along with most of the Canada and Greylag Geese.  Strange how few gulls were about but I did observed the odd Herring Gull.  The walk back to the Visitors Centre also produced a flock of eight Greenfinches and a lone female Kestrel resting in the top of a roadside tree. 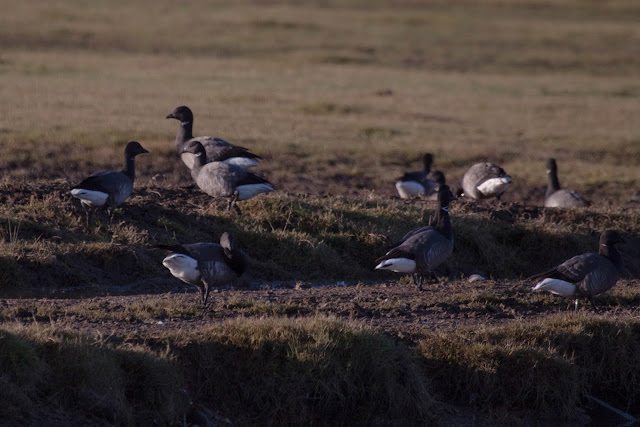 Before leaving for the journey over to Freiston, I managed to find a distant, small flock of feeding Fieldfare, more Pheasants, a Blue Tit on the feeders and, finally, both Magpie and Woodpigeon.  But not one single Collared Dove all day; must be some sort of record!


The journey over to Freiston was, perhaps on reflection, a little on the luxury side given that so few additional birds were added to the day's total.  More Wigeon and Lapwing a plenty and a dozen or so Mute Swans on the pool whereas, on the grazing land on the other side of the bank running alongside the path, another huge three-figure flock of resting Wigeon.  But, in addition to a quartet of Redshank, the pool did provide a single Grey Plover,  On the island a dozen or so Jackdaw and a large number of roosting Black-headed Gulls between the shore and the island.  Lovely to find a trio of Little Grebe and even a Robin joined the local Blackbirds to watch me pass through the avenue of bushes.

Check out the accompanying website at http://www.birdingaxarquia.weebly.com for the latest sightings, photographs  and additional information
Posted by Bob Wright - The Axarquia Birder at 11:35