Never on a Sunday, a Sunday - but sometimes!

I tell visiting and local birders and I am sure so does everyone else, avoid birding in school holidays and especially at week-ens if at all possible.  Sunday is notoriously bad in sunny weather when every Spaniard and his dog(s), nevermind the extended family, is present at every accessible picnic spot.  Yes, I have been known on the odd occasion to slip down early to the Rio Velez before the workers, dog walkers and nudists arrive but friends Derek and Barbara Etherton have gone one better as can be seen from the report I received late last night.  Out all day at well-known picnic/walking spots and yet they still manged to see some great birds, many firsts for the year, and ended with a tally in excess of seventy species. 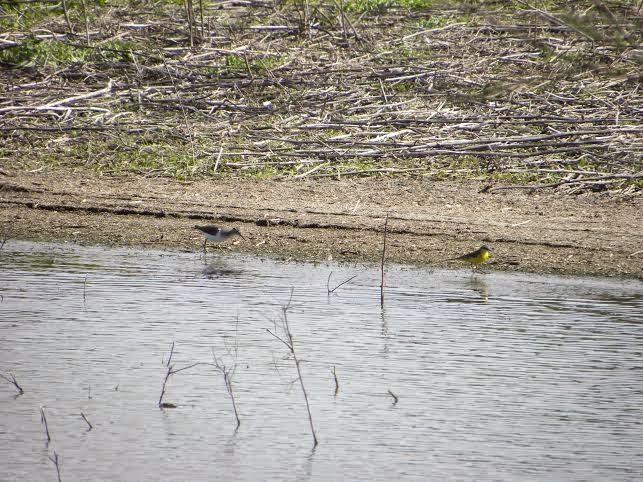 Broke a golden rule today and went birding!  Well we don't usually go on SFPD [Spanish Family Picnic Day], but made an exception today.  A quick visit to Zapata showed most of the heavy rain water had flowed through leaving a perfect terrain for the numerous Little Ringed Plovers and countless Yellow and Red-rumped Swallows.  House Martins were busy too but guess the Sand Martins had gone through.  Still a couple of Meadow Pipits, White Wagtails around.  Plenty of Linnets, Goldfinch, Cetti's Warbler were around the water.  Grey Heron, Cattle and Little Egret around.  Green Sandpiper were feeding well.

On to Rio Grande and the picnickers were out in force - somehow I just love the closeness of Spanish families.  Black-winged Stilt, more Little Ringed Plovers, Greenshank and a Marsh Sandpiper [two weeks running!].  Common Kestrel was about and picked up a distant large raptor. As it came closer I could ID it as a Golden Eagle when suddenly it was 'ambushed' by two [a pair?] of Booted Eagles and the 'fighters' saw off the 'bomber'!  More Yellow Wagtails; are there more than ever this year?

On to Teba rock; Griffon Vultures, Chough, Crag Martin and round at Teba Tajo [gorge] about 20 Alpine Swifts.  Plenty of small stuff, Corn Buntings by the dozen but a lack of shrikes.  Then off to Laguna Dulce.  Very sad to see one of the Mongoose we sometimes view here squashed on the road, shame it didn't know the Green Cross Code!  The lake held the usual suspect quite a few Flamingo [greater], Gadwall, so many Red-crested Pochard, Little Grebe, a female Marsh Harrier resting, seemingly hundreds of Coots, Moorhen, Shoveller and Common Kestrel and, as we left, a lone Collared Pratincole flew over.

Leaving here we turned up the Sierra de Yegas road [road??] to look for early Woodchat Shrikes, but a shock awaited us.  Wow!  after 5 years of enormous potholes and tank traps,  a form of repair to the road.  Repair is perhaps too much to say, but the worst holes have been filled with loose 'scalpings' and it certainly makes it easier to drive, at least until it rains again!  Entering Fuente de Piedra visitor centre by the back road a fine pair of Mediterranean Gulls were on the water treatment plant. The lake on the left entering the visitors centre still had a couple of Black-tailed Godwits, three Ruff, a couple of Redshank and a super Wood Sandpiper in with a 4/5 Yellow [blue headed] Wagtails. Other notables were Black Terns,  Lapwings and a lot more water after a week's rain!

Driving on to complete a circular tour,  7 Lesser Kestrel were seen at the ruins near Canterras mirador.  From the viewpoint itself a surprise were 2 White Storks along with 4 Purple Swamphens, a fine pair of Marsh Harriers amongst the 'usual'.  Time was against us now so didn't enter Las Latas but spied a Raven sitting sitting on the Lesser Kestrels nesting site.  On the road back home near Campillos a 'clod of earth' materialised into a Buzzard.

No full list to bore you with but a total of 76 species today.  Not too bad for an 'ad hoc' day.


Check out the accompanying website at http://www.birdingaxarquia.weebly.com for the latest sightings, photographs and additional information.
Posted by Bob Wright - The Axarquia Birder at 04:43

All meetings are on a Thursday morning unless specifically stated otherwise. Meeting times 9.30 unless otherwise stated.
2020 Visits:
THURSDAY 19 MARCH: Ventas de Zafarraya
Meet at the mirador on the old railway track just after passing under the bridge on the Malaga/Granada border for a 9.30 walk up and back through the old tunnel then on to either the "growing fields" or El Robledal depending upon weather.
THURSDAY 16 April: To be announced
THURSDAY 21 May: Sierra Loja, Granada province.
Meet fro 9.30 start at the Abades Serice Station on the A92 above Loja travelling towards Granada. Please remember to bring liquid and picnic lunch. All being well all three Wheatears and Rock Thrush.