Still misty as I made my way along the coast to meet up with the rest of the group in Salobrena.  However, along with Pat and Eric Lyon, Gerry Collins, Marcus and Liz Routes, the welcome return of Pat Shaw and guests Peter Nash and Nick Curtis on holiday in the area from England, the weather was rapidly improving as we set off just before 9.15 to make our way to the waters at Las Norias in Almeria province.  A most strange site this with, a large lake this, presumably the result of sand excavation, surrounded by dirty plastic greenhouses, a plastic recycling factory and all other sorts of industrial "goings-on" including a smelly farm!  But it gets the birds.

Leaving the motorway to head down to the village we soon had many Crested Larks, Blackbirds and Spotless Starlings.  The first stop was at the central causeway where a connecting road actually dives the water.  No sooner out of the cars and we could hear, then see, Reed Warblers.  Whiskered Terns were flying over the water along with Barn Swallows and House Martins whilst on the water were very god numbers of Great crested Grebes and a range of ducks including Mallard, Red-crested and Common Pochard, Gadwall and even a departing pair of Shelduck.  At the far western end of the water whilst looking at the resting Whiskered Terns we also picked out a couple of Mediterranean Gulls to add to the Black-headed and Yellow-legged Gulls that were in the air above us.  Soon we had also added both Little and Black-necked Grebes whilst, feeding along the edges were both Common and Green Sandpipers plus a single Greenshank.  The nearer stone bank also had a feeding White Wagtail.  Ignoring the House Sparrows we walked to the back of a small building where we had a superb view of a singing Great Reed Warbler. 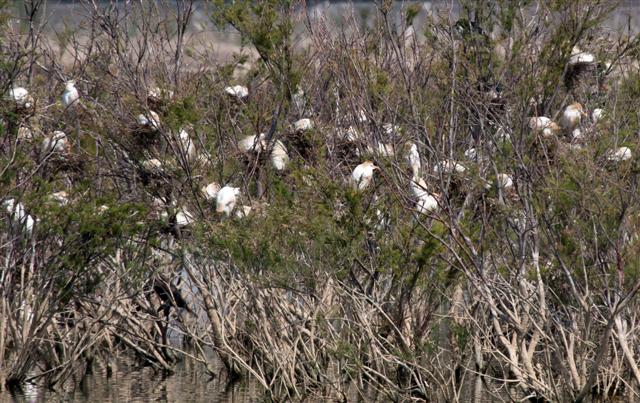 Then it was simply a case of moving to the eastern end of the water to park up on the causeway and check-out both sides.  The traditional Cattle Egret colony seemed to have somewhat increased with large numbers of nesting birds but the colony also included at least a dozen pairs of Night Herons whilst, among the general gathering, were also a number of Little Egrets.  A single second summer Night Heron raised hopes initially of a possible Little Bittern but that had to wait for another thirty minutes or so before Eric just manged to get a glimpse as one of these very illusive little herons landed and rather quickly worked his way down the reeds out of sight.


The main water had a range of the birds already seen whilst near at hand were good views of Red-crested Pochard and Great Crested Grebe plus a few Shovelers.  Whilst watching a number of Cormorants overhead it very soon became apparent that there was also a small number of feeding Collared Pratincoles above us giving fleeting opportunities to try and get a photo of the birds in flight as they swooped around the sky.  Coots and Moorhens were also about whilst the previous hirundines had now also been joined by a few Red-rumped Swallows.  A walk to the fields at the far end produced both Little Ringed and Ringed Plover along with another White Wagtail on a flooded area.

Walking back towards the car a single male Reed Bunting was seen at close quarters and, in addition to the ever present Collared and Rock Doves, a pair of Turtle Doves were found on the wires above, my first of the year.  A handful of Greenfinches were moving around as we walked along the lake-side path where we had yet more close views of both Little and Black-necked Grebes.  Above, in addition to the hirundines and the occasional Night Heron, we now had a number of swifts, mainly Pallid but also some Common Swifts.  Finally, Eric also managed to find a single Wood Sandpiper feeding on the reed edges.


Time to move across to the salinas to the west of Roquetas de Mar where, much to my surprise, there was not a single Flamingo to be seen.  Crossing the causeway we had Slender-billed Gulls on both sides along with a Little Egret and then our one and only Squacco Heron.  (No Grey Herons were to be seen all day.)  To our right our first White-headed Duck and then a pair of Avocets took off.  Moving along the track to check out the far end and small islands we were able to add a couple of Purple Swamphens in addition to more of the same, although we did manage to add Black-winged Stilt.  Then a Sandwich Tern flew overhead which added to our pleasure whilst a Magpie sought rest on a neighbouring bush.. Driving back alongside the salinas we added a number of Stonechats to the the list that were resting on the wires plus a rather handsome Kestrel.  The main freshwater lake seem almost devoid of birds apart from the odd Common Pochard so we entered the Parque National to the hidden pond where not only did we find both Red-crested Pochard and White-headed Ducks but both Common and Red-knobbed Coots, the latter wearing its "084" collar!  Above us, the House Matins and Barn Swallows had been joined by a very small number of Sand Martins.  Leaving the pond to make our way home, after a stop for lunch, we had our only large raptor of the day, a single Marsh Harrier.  Other birds recorded during this latter part of the day included Serin, Zitting Cisticola, Chiffchaff and a good number of Woodchat Shrikes giving a final tally of 60 species - until Eric or somebody else informs me otherwise! 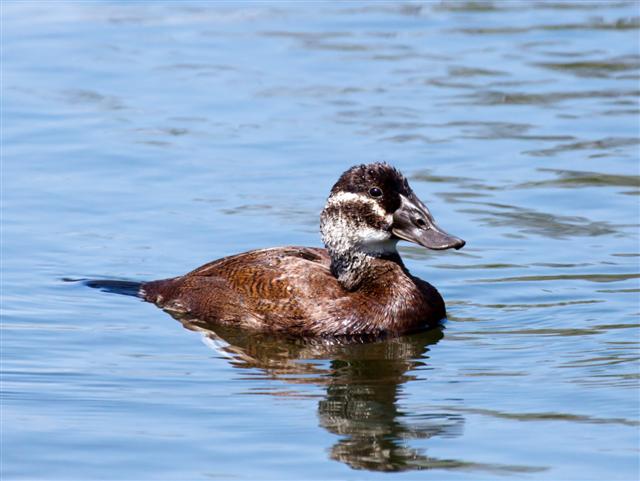 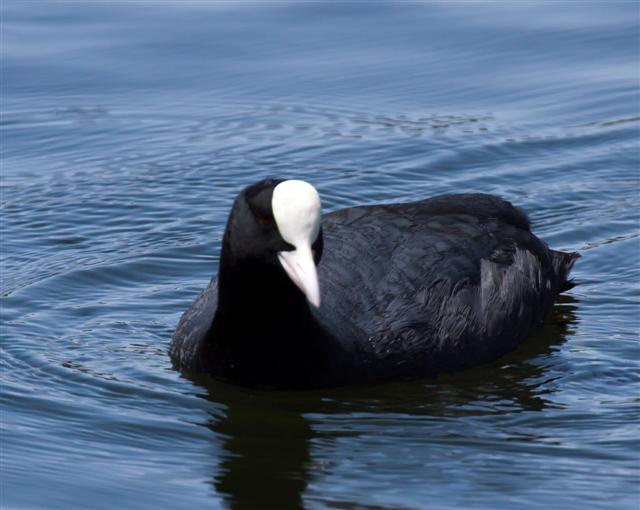 Check out the accompanying website at http://www.birdingaxarquia.weebly.com for the latest sightings, photographs and additional information.
Posted by Bob Wright - The Axarquia Birder at 04:38